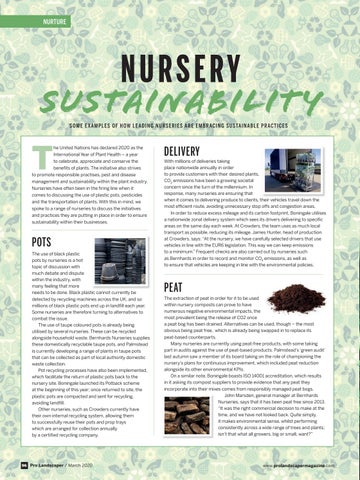 he United Nations has declared 2020 as the International Year of Plant Health – a year to celebrate, appreciate and conserve the benefits of plants. The initiative also strives to promote responsible practises, pest and disease management and sustainability within the plant industry. Nurseries have often been in the firing line when it comes to discussing the use of plastic pots, pesticides and the transportation of plants. With this in mind, we spoke to a range of nurseries to discuss the initiatives and practices they are putting in place in order to ensure sustainability within their businesses.

POTS The use of black plastic pots by nurseries is a hot topic of discussion with much debate and dispute within the industry, with many feeling that more needs to be done. Black plastic cannot currently be detected by recycling machines across the UK, and so millions of black plastic pots end up in landfill each year. Some nurseries are therefore turning to alternatives to combat the issue. The use of taupe coloured pots is already being utilised by several nurseries. These can be recycled alongside household waste. Bernhards Nurseries supplies these domestically recyclable taupe pots, and Palmstead is currently developing a range of plants in taupe pots that can be collected as part of local authority domestic waste collection. Pot recycling processes have also been implemented, which facilitate the return of plastic pots back to the nursery site. Boningale launched its Potback scheme at the beginning of this year; once returned to site, the plastic pots are compacted and sent for recycling, avoiding landfill. Other nurseries, such as Crowders currently have their own internal recycling system, allowing them to successfully reuse their pots and prop trays which are arranged for collection annually by a certified recycling company.

With millions of deliveries taking place nationwide annually in order to provide customers with their desired plants, CO2 emissions have been a growing societal concern since the turn of the millennium. In response, many nurseries are ensuring that when it comes to delivering produce to clients, their vehicles travel down the most efficient route, avoiding unnecessary stop offs and congestion areas. In order to reduce excess mileage and its carbon footprint, Boningale utilises a nationwide zonal delivery system which sees its drivers delivering to specific areas on the same day each week. At Crowders, the team uses as much local transport as possible, reducing its mileage. James Hunter, head of production at Crowders, says: “At the nursery, we have carefully selected drivers that use vehicles in line with the EUR6 legislation. This way we can keep emissions to a minimum.” Frequent checks are also carried out by nurseries such as Bernhards in order to record and monitor CO2 emissions, as well as to ensure that vehicles are keeping in line with the environmental policies.

PEAT The extraction of peat in order for it to be used within nursery composts can prove to have numerous negative environmental impacts, the most prevalent being the release of CO2 once a peat bog has been drained. Alternatives can be used, though – the most obvious being peat free, which is already being swapped in to replace its peat-based counterparts. Many nurseries are currently using peat-free products, with some taking part in audits against the use of peat-based products. Palmstead’s ‘green audit’ last autumn saw a member of its board taking on the role of championing the nursery’s plans for continuous improvement, which included peat reduction alongside its other environmental KPIs. On a similar note, Boningale boasts ISO 14001 accreditation, which results in it asking its compost suppliers to provide evidence that any peat they incorporate into their mixes comes from responsibly managed peat bogs. John Marsden, general manager at Bernhards Nurseries, says that it has been peat free since 2013. “It was the right commercial decision to make at the time, and we have not looked back. Quite simply, it makes environmental sense, whilst performing consistently across a wide range of trees and plants; isn’t that what all growers, big or small, want?”