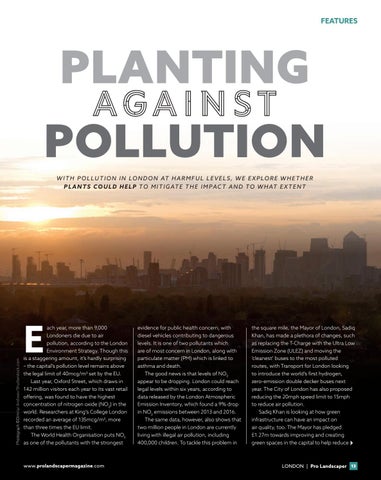 ach year, more than 9,000 Londoners die due to air pollution, according to the London Environment Strategy. Though this is a staggering amount, it’s hardly surprising – the capital’s pollution level remains above the legal limit of 40mcg/m3 set by the EU. Last year, Oxford Street, which draws in 142 million visitors each year to its vast retail offering, was found to have the highest concentration of nitrogen oxide (NO2) in the world. Researchers at King’s College London recorded an average of 135mcg/m3, more than three times the EU limit. The World Health Organisation puts NO2 as one of the pollutants with the strongest

evidence for public health concern, with diesel vehicles contributing to dangerous levels. It is one of two pollutants which are of most concern in London, along with particulate matter (PM) which is linked to asthma and death. The good news is that levels of NO2 appear to be dropping. London could reach legal levels within six years, according to data released by the London Atmospheric Emission Inventory, which found a 9% drop in NO2 emissions between 2013 and 2016. The same data, however, also shows that two million people in London are currently living with illegal air pollution, including 400,000 children. To tackle this problem in

the square mile, the Mayor of London, Sadiq Khan, has made a plethora of changes, such as replacing the T-Charge with the Ultra Low Emission Zone (ULEZ) and moving the ‘cleanest’ buses to the most polluted routes, with Transport for London looking to introduce the world’s first hydrogen, zero-emission double decker buses next year. The City of London has also proposed reducing the 20mph speed limit to 15mph to reduce air pollution. Sadiq Khan is looking at how green infrastructure can have an impact on air quality, too. The Mayor has pledged £1.27m towards improving and creating green spaces in the capital to help reduce