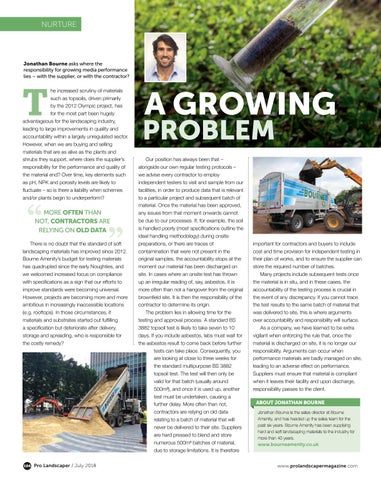 Jonathan Bourne asks where the responsibility for growing media performance lies – with the supplier, or with the contractor?

he increased scrutiny of materials such as topsoils, driven primarily by the 2012 Olympic project, has for the most part been hugely advantageous for the landscaping industry, leading to large improvements in quality and accountability within a largely unregulated sector. However, when we are buying and selling materials that are as alive as the plants and shrubs they support, where does the supplier’s responsibility for the performance and quality of the material end? Over time, key elements such as pH, NPK and porosity levels are likely to fluctuate – so is there a liability when schemes and/or plants begin to underperform?

MORE OFTEN THAN NOT, CONTRACTORS ARE RELYING ON OLD DATA There is no doubt that the standard of soft landscaping materials has improved since 2012. Bourne Amenity’s budget for testing materials has quadrupled since the early Noughties, and we welcomed increased focus on compliance with specifications as a sign that our efforts to improve standards were becoming universal. However, projects are becoming more and more ambitious in increasingly inaccessible locations (e.g. rooftops). In those circumstances, if materials and substrates started out fulfilling a specification but deteriorate after delivery, storage and spreading, who is responsible for the costly remedy?

PROBLEM Our position has always been that – alongside our own regular testing protocols – we advise every contractor to employ independent testers to visit and sample from our facilities, in order to produce data that is relevant to a particular project and subsequent batch of material. Once the material has been approved, any issues from that moment onwards cannot be due to our processes. If, for example, the soil is handled poorly (most specifications outline the ideal handling methodology) during onsite preparations, or there are traces of contamination that were not present in the original samples, the accountability stops at the moment our material has been discharged on site. In cases where an onsite test has thrown up an irregular reading of, say, asbestos, it is more often than not a hangover from the original brownfield site. It is then the responsibility of the contractor to determine its origin. The problem lies in allowing time for the testing and approval process. A standard BS 3882 topsoil test is likely to take seven to 10 days. If you include asbestos, labs must wait for the asbestos result to come back before further tests can take place. Consequently, you are looking at close to three weeks for the standard multipurpose BS 3882 topsoil test. The test will then only be valid for that batch (usually around 500m³), and once it is used up, another test must be undertaken, causing a further delay. More often than not, contractors are relying on old data relating to a batch of material that will never be delivered to their site. Suppliers are hard pressed to blend and store numerous 500m³ batches of material, due to storage limitations. It is therefore

important for contractors and buyers to include cost and time provision for independent testing in their plan of works, and to ensure the supplier can store the required number of batches. Many projects include subsequent tests once the material is in situ, and in these cases, the accountability of the testing process is crucial in the event of any discrepancy. If you cannot trace the test results to the same batch of material that was delivered to site, this is where arguments over accountability and responsibility will surface. As a company, we have learned to be extra vigilant when enforcing the rule that, once the material is discharged on site, it is no longer our responsibility. Arguments can occur when performance materials are badly managed on site, leading to an adverse effect on performance. Suppliers must ensure that material is compliant when it leaves their facility and upon discharge, responsibility passes to the client. ABOUT JONATHAN BOURNE Jonathan Bourne is the sales director at Bourne Amenity, and has headed up the sales team for the past six years. Bourne Amenity has been supplying hard and soft landscaping materials to the industry for more than 40 years. 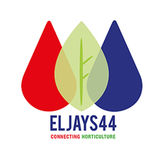