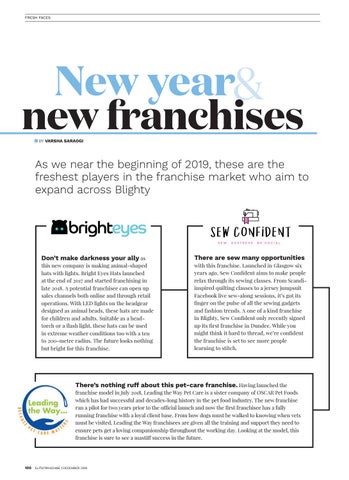 As we near the beginning of 2019, these are the freshest players in the franchise market who aim to expand across Blighty

Don’t make darkness your ally as this new company is making animal-shaped hats with lights. Bright Eyes Hats launched at the end of 2017 and started franchising in late 2018. A potential franchisee can open up sales channels both online and through retail operations. With LED lights on the headgear designed as animal heads, these hats are made for children and adults. Suitable as a headtorch or a flash light, these hats can be used in extreme weather conditions too with a ten to 200-metre radius. The future looks nothing but bright for this franchise.

There are sew many opportunities with this franchise. Launched in Glasgow six years ago, Sew Confident aims to make people relax through its sewing classes. From Scandiinspired quilting classes to a jersey jumpsuit Facebook live sew-along sessions, it’s got its finger on the pulse of all the sewing gadgets and fashion trends. A one of a kind franchise in Blighty, Sew Confident only recently signed up its first franchise in Dundee. While you might think it hard to thread, we’re confident the franchise is set to see more people learning to stitch.

There’s nothing ruff about this pet-care franchise. Having launched the franchise model in July 2018, Leading the Way Pet Care is a sister company of OSCAR Pet Foods which has had successful and decades-long history in the pet food industry. The new franchise ran a pilot for two years prior to the official launch and now the first franchisee has a fully running franchise with a loyal client base. From how dogs must be walked to knowing when vets must be visited, Leading the Way franchisees are given all the training and support they need to ensure pets get a loving companionship throughout the working day. Looking at the model, this franchise is sure to see a mastiff success in the future. 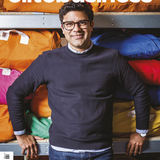