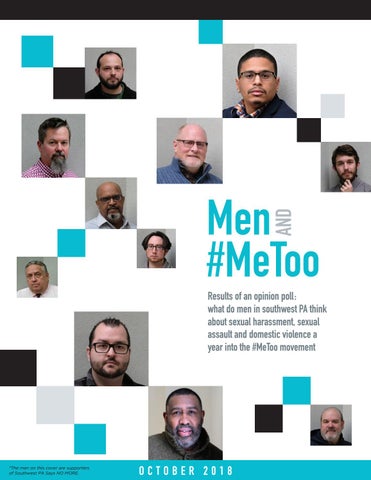 Men #MeToo Results of an opinion poll: what do men in southwest PA think about sexual harassment, sexual assault and domestic violence a year into the #MeToo movement

*The men on this cover are supporters of Southwest PA Says NO MORE.

Men #MeToo Results of an opinion poll: what do men in southwest PA think about sexual harassment, sexual assault and domestic violence a year into the #MeToo movement

The #MeToo movement has exposed the scope of harassment and violence in the lives of women. We believe that abuse is preventable, but teaching riskreduction strategies to women wonâ&amp;#x20AC;&amp;#x2122;t solve this issue. We need men to be engaged. In recent years, many men have joined women in speaking out against abuse, calling out abusers, demanding accountability from institutions and promoting healthy respectful relationships. But many men have gone quiet during #MeToo. We wanted to know what men think about violence against women, a year into the #MeToo movement. So, we asked them.

NOTE: All statistics listed are for men in southwest Pennsylvania. The poll also included a national sample of men, for comparison. The results of the national sample were not substantially different. NOTE on language: Sexual harassment, sexual assault and domestic violence are highly gendered crimes. Most victims are women and girls and the vast majority of perpetrators are men. However, men can also be victims and women can also perpetrate abuse. The impacts are serious, regardless of the gender identity of the victim or perpetrator. We also acknowledge that some groups (women of color, people with disabilities, people who identify or are perceived to be gay/lesbian/ transgender) are at substantially higher risk for victimization. The parameters of this survey prevented us from exploring more nuanced attitudes and beliefs.

METHODOLOGY Polling provided by Change Research, a Public Benefit Corporation, per a poll of 1304 men, 671 in a ten-county area of southwest Pennsylvania and 633 nationally in the United States. Sample demographics reflect the population for age, education, and ethnicity. Survey conducted online September 24 - 29, 2018. This report reflects only the results of the southwest PA sample.

Domestic violence, sexual assault and sexual harassment are personal issues to the majority of men

of men in SWPA acknowledge that domestic violence, sexual assault, and sexual harassment against women are common experiences.

say that they or someone close to them has personal experiences of victimization. • • •

say it’s important to believe women who speak publicly about their experience with harassment or abuse.

of men believe that violence against women and girls can be prevented.

agree that “Men like me have an important role to play in preventing violence and harassment against women.”

say that most men respect women and oppose harassment and abuse committed against women.

believe that “Expectations for men’s behavior towards women have changed.”

believe “More men speak up than before when other men are being disrespectful or abusive to women.”

think it’s positive that more women are breaking their silence and speaking publicly about their experience with harassment and abuse.

But when discussing specific examples, opinions are mixed Men are divided in how they feel about the #MeToo movement.

are supportive, and 51% are concerned that #MeToo has gone or will go overboard.

Men are split in how they think allegations of abuse should be responded to:

say that we should tend to believe the allegations unless there is hard evidence that they did not occur.

say that we should tend to be skeptical and wait for hard evidence that the abuse or harassment occurred.

Men are mixed in their opinions about how victims and perpetrators are treated after abuse is disclosed.

of men, 59%, think victims are generally treated fairly and

42%, think people who are accused of harassment or abuse are treated fairly.

Talking about harassment and abuse is difficult for most men

Even with unceasing news coverage over the last year, most men report that they haven’t been talking about it.

The 58%, said that no one talked to them about how to recognize the warning signs of abusive behavior, though this is changing.

But many men are willing to talk about these issues, in order to prevent domestic violence, sexual assault or sexual harassment.

support action at the local or community level, 82% at the state level and 76% at the federal level.

of men say schools, law enforcement, and business leaders should do more to prevent abuse and harassment.

men say faith based groups, elected officials, healthcare providers and nonprofits should do more. out of

But men have not reached out much to initiate those conversations:

with their child’s school

However, more men say they would be willing to engage in conversations if it would help to prevent harassment and abuse:

their % with child’s school 5

Overwhelming majorities of men think that employers should take action

support more awareness around how to report abusive behavior in the workplace and what the organizationâ&amp;#x20AC;&amp;#x2122;s process is for addressing those reports.

support strong and consistently applied policies against inappropriate or illegal harassment or abuse in the workplace.

forced arbitration that requires allegations of abusive conduct in a workplace to be settled in private hearings rather than the public judicial system.

support having more female executives and board members.

Over the past year,

of men say theyâ&amp;#x20AC;&amp;#x2122;ve learned more about sexual harassment, domestic violence, or sexual assault this year, or are willing to learn more in the future.

18% made changes in their behavior around women.

of men have offered support to a victim of abuse or harassment this year.

of men are willing to intervene if they witness or find out about abuse or harassment. In the last year, 6

of men told someone that a comment or a joke they made about women was inappropriate;

And 35% would be willing to offer support in the future.

Conclusions and next steps The vast majority of men

acknowledge that harassment and abuse are common experiences for women. Most men say it’s important to believe women who speak publicly about these experiences. They feel strongly that action should be taken to prevent abuse.

• Commit to calling attention to or shutting down friends and colleagues when they engage in sexual harassment or other disrespectful talk or jokes. This is difficult but important. Practice these sentences:

However, there is a gap in putting these beliefs into action. Small

– “I don’t get it. What’s funny about that?” or “Is that what you really meant to say?” This can communicate that you disapprove and give the other person an opportunity to take their comment back.

– “Dude, that’s not cool” or “I think you are being disrespectful.”

actions taken by many people can make a big difference in prevention. We ask supportive men to take one of the following

• Ask your mother, partner or another close woman in your life about her experiences with sexual harassment. Many don’t share these experiences unless they are asked and feel that they’ll be listened to and taken seriously. • Reach out to the Human Resources department or senior leadership at your company. Share this report’s findings that there is widespread support for employers to take action. You might say something like: “There has been a lot in the news and on social media about sexual harassment. What would happen in our company if someone reported it?” • Next time you are in the car with a young person you care about, ask them what they think is important in a healthy relationship. Talk to them about what kind of man/woman you hope they will grow into; and that you hope they will find people who listen to, respect and support them. Great resources are available at LoveIsRespect.org. • Listen for and interrupt when you hear men joke and (playfully) put each other down using comparisons to women. (“You throw like a girl” “C’mon ladies!” or more graphic “locker room talk”). Even when meant to be harmless, it conveys messages of disrespect for females. Challenge yourself to use different language.

– Say “I don’t support this” before you walk away. If you’re worried about what the others might do, tell someone. – Offer support to the person being harassed or abused: “I’m sorry. You don’t deserve this. I believe you.”

of men who believe that “Men like me have an important role to play in preventing violence and harassment against women” each took a small step to put their beliefs into action, it would profoundly change the culture. Sexual harassment, sexual assault and domestic violence could become rare.

Results of an opinion poll: What do men in Southwestern Pennsylvania think about sexual harassment, sexual assault, and domestic violence a year into the #MeToo movement