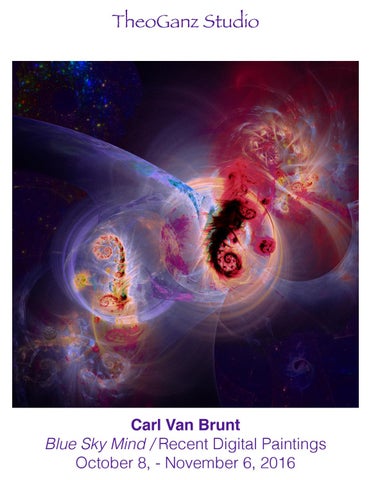 ! ! Carl Van Brunt Artist Statement The opening of Blue Sky Mind coincides with my 70th Birthday and so represents a milestone for me personally in more ways than one. There is the obvious crossing of a demographic threshold. I am now officially a senior citizen. There is another marker which is hidden but which is reflected in the work on view. After a long walk, I havenâ&#x20AC;&#x2122;t reached a mountain top, but I have gotten to a point of view which, for lack of a better word, I call openmindedness. This is basically the embrace of uncertainty as a natural and authentic state of mind and a choice to withhold single minded allegiance to any particular conceptual view of the world, no matter how insightful it may be. This has not lead me to cynicism and itsâ&#x20AC;&#x2122; mode of expression irony. Nor hasâ&#x20AC;¨ it lead me to some form of romanticism, though I am inspired by the natural beauty of the Hudson Valley. I simply have come to accept the limits of the knowledge I am able to attain. This is not an anti-intellectual stance. I greatly value intelligence and I am in awe of great original thought and the incredible achievements of art and science. Those who know me can testify I have strongly held political opinions as well. I simply am aware that for me all these things are not the thing. In fact, I have come

! to realize and accept that there is no thing, no single answer to lifeâ&#x20AC;&#x2122;s enduring questions. Surprisingly, this is not an occasion for despair. Instead it feels something like the beginnings of liberation. And the realization that freedom is probably not a thing either, not a noun in any case. Itâ&#x20AC;&#x2122;s more like a verb. The way I made the pictures in this exhibition is improvisatory. I start by playing around on my Mac with software called Chaotica which is a fractal image generator. Eventually some images begin to emerge that capture my interest. I begin putting these together in Photoshop using various layering techniques. Any given picture may have 20 plus layers. Sometimes I add other images made with another fractal generator called Fractal Domains, and simple 3-D shapes made with a program called Carrara. I add and subtract layers until the picture reaches some sort of balance that seems to convey meaning, as indeterminate and multifaceted as it may be.

Currently Gallery Director of the Woodstock Artists Association & Museum, Carl Van Brunt has been active in the Hudson Valleyâ&#x20AC;&#x2122;s art scene for the past 15 years. Prior to that he had a career in advertising in New York City. Van Brunt has been an artist his entire adult life and has been focused on digital art since the early 1980s. His work has been shown throughout the region in both solo and group exhibitions. In 2002, he founded the Van Brunt Gallery in Beacon which was considered one of the leading galleries in the Hudson Valley. After closing the gallery in 2011 he and his wife continued to promote regional artists at art fairs, museum exhibitions and popup shows under the banner of Van Brunt Projects. In 2010 Van Brunt was given the Beacon Arts Award.