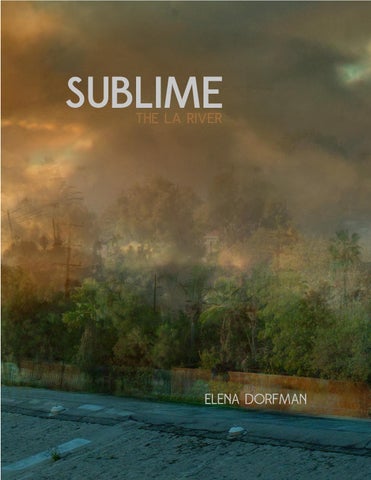 In the summer of 1867, the American photographer Carleton Watkins hauled a mammoth wooden camera through the wilderness of Oregon, taking pictures of the mountains. To prepare each negative, he poured noxious chemicals onto a glass plate the size of a windowpane and exposed it while still wet, developing it on the spot. Even then, his work was not complete. Because wet-plate emulsions are disproportionately sensitive to blue light, his skies were overexposed, utterly devoid of clouds. Back in his San Francisco studio, Watkins manipulated his photos to resemble the landscapes he’d witnessed. His finished prints were composites, completed with a separate set of cloudfilled negatives.

While his intervention made the mountain vistas more meteorologically accurate, she intentionally introduced physical impossibilities, from conflicting perspectives to rearranged geology, much as a painter might fictionalize a landscape. Yet in another sense, each photographer was artfully striving for truth about how we experience the world, laboring against the inadequacies of the camera. For Watkins, the constraints were physical. For Dorfman, they’re psychological, a discrepancy between photomechanical depiction and how the brain records what the eyes perceive. A keen observer of the world and her own perceptions, she understands that her pictures can be made to seem more psychologically real by making them less literally realistic.

Nearly a century and a half later, Elena Dorfman – another American photographer porting a large-format camera – spent several summers in the rock quarries of Kentucky and Indiana, landscapes as dramatic as Watkins’s Oregon. Dorfman had none of the old limitations. Her digital Hasselblad instantaneously captured 32-megapixel photos in full color. But it didn’t satisfy her. In postproduction she created composites on her computer, layering as many as 300 images to obtain effects unlike anything seen in nature.

Empire Falling, which Dorfman completed in 2012, stitched together conflicting perspectives much as the brain enlists saccadic eye movements to construct a single unified vista rich in visual information. In her most ambitious pictures, Dorfman took this power of synthesis to an extreme by transparently layering scenes viewed from completely different directions or up close and at a distance. In a single two-dimensional image, Dorfman presented the visual information we’d glean by exploring a three-dimensional landscape over many hours or days. If you look at one of her pictures for long enough, you might start to believe you’d actually experienced the place.

In one sense, Dorfman was doing the opposite of what Watkins achieved with his library of clouds.

But Dorfman was seeking something deeper than an optical illusion – or pictorial travelogue – in her photographs of quarries. “Manipulating and reconstructing the landscape, I reassemble and layer the images emulating the natural process of stratum on stratum,” she wrote in her artist’s statement. In other words, she was photographing the layering of time. Dorfman’s new body of work, Sublime, significantly expands on this concept by photographically exploring the rippled layers of history and memory along the fifty-two miles of the Los Angeles River. The LA River is an ideal subject for Dorfman’s psychotemporal artistic investigation. Ever since 1825 – when a flood defined the river’s current course – people have repeatedly forgotten about it only to be forcefully reminded. Los Angeles flooded more than ten times before 1900, repeatedly destroying homes and farms built along the floodplain. Major floods in 1914 and 1916 were even more catastrophic, causing millions of dollars in damage. Angelinos passed bonds to build levees, but forgetfulness and complacency returned before meaningful changes could be made. More housing was built instead, including two hundred homes destroyed in a 1934 flood that killed forty-nine people. That made an impression on city planners. Applying for New Deal funding and assistance from the Army Corps of Engineers, Los Angeles finally confronted the unruly waterway – by sentencing it to oblivion. Nearly two hundred million gallons of concrete were poured into the river over a period of two decades, confining all but a few short stretches to a flat-walled cement channel. Declared non-navigable, the denatured waterway was fenced off as a drainage ditch, a fate reinforced in the 1980s when the Donald C. Tillman Water Reclamation Plant began pouring in millions of gallons of treated wastewater every day. With the exception of an occasional movie shoot – such as a high-speed chase scene in Terminator 2 – the LA River essentially vanished, ignored by all but the homeless who camped there and kids who tagged it with spraypaint. This is the river that Dorfman started to explore in 2013. Notably, she was not alone. Over the past several years, the river has been rediscovered (or remembered) by a growing number of Angelinos in search of recreational space or a natural refuge within their ever-more-hectic metropolis. Parts of the river are now zoned for kayaking. There’s discussion about removing cement so that wildlife can thrive. In this period of uncertainty about the river’s future, Dorfman’s photography encompasses and compresses all the many strata of the river’s history by layering traces of nature and development and decay.

Some layers date from long before she was born. In her research, Dorfman uncovered wet plates shot by amateur photographers in the 1800s. She scanned these pictures and sometimes retraced where they were originally shot. To her archive of vintage images, she added approximately twenty thousand of her own, produced over a two-year period of walking every foot of the river with her camera. She then worked by hand, turning proof-sheet prints into paper cutouts that she layered and shifted to compose each of the ten works in the Sublime series. Guided by these paper templates, she created the final composite images in Adobe Photoshop, meticulously blending them to ensure invisible transitions. A typical artwork can incorporate as many as one hundred and fifty images. Some of these might be used to define the geography, others to alter it, and a few might be completely recontextualized in the service of pure invention. For example, in Sublime: The LA River 8, Dorfman tracked down the spot in Griffith Park where an anonymous photographer set his tripod in the mid-1800s. She made her own photographs there and in the surrounding area, layering these transparently as if to let us see through the intervening century. Looking more carefully, we notice more surreal details, such as the unnatural coloring of the mountains, which Dorfman achieved by overlaying images of lurid chemical runoff found elsewhere on the river. The unreliable perspective and disconcerting coloration give the image the quality of a memory, at once less trustworthy and more truthful than a straightforward photograph. Memories are episodic, equivalent to the saccadic act of seeing. They’re constructed images that recompose pertinent details about a specific time and place in relation to a lifetime of knowledge and experience. We may have been someplace often and may know about its deeper past from archival albums or Wikipedia. Any of this can become part of our mental image, as can myriad other facts. The lurid coloration of the mountains, for instance, may be a way of marking what we understand about the Anthropocene, in which the human impact on nature is ubiquitous. Through Dorfman’s photographs, we vicariously recollect what she has seen and learned. Her memories become our own. Her works are uncanny. Yet they are also unquestionably sublime. They advance a visual tradition dating back to eighteenth century England, an aesthetic that Edmund Burke originally defined as massive, gloomy and rugged. This sublime vision was first introduced to American landscape painting by Thomas Cole

on the Hudson River in 1825 (coincidentally the same year that the LA River took its present course). Cole’s work – and the work made by other members of the Hudson River School – have directly influenced Dorfman, who studied their paintings carefully while working on her river series. Their work pervades her color palette and the ambiance of her photographs, a mood that is simultaneously magnificent and foreboding. In one notable case – Sublime: The LA River 1 – she even responds directly to one of Cole’s paintings. The painting is The Savage State from Cole’s epic sequence The Course of Empire, which traces the rise and fall of a great ancient civilization, evoking a cycle of growth and ruin that could equally apply to present-day Los Angeles. In this series, Cole aspired to what he called a “higher style of landscape”, arguing that a serious artist’s work “ought not to be a dead imitation of things” because it should possess “the power to impress a sentiment, or enforce a truth.” He approached this ideal by constructing fictitious scenes imbued with visual qualities that psychologically primed the viewer to adopt his philosophical perspective. In Sublime: The LA River 1, Dorfman likewise impresses sentiments and enforces truths. All of her Sublime photographs do, carrying forward Cole’s cyclical theme in time and technique. The photographs prime the viewer to confront “the ebb and flow between civilization and savagery, the cycle of social and cultural development, and the descent into ruin and back again” (as Dorfman phrases the philosophical premise of her series in her artist’s statement). But the medium of photography allows her to impress sentiments and enforce truths in ways that are less dogmatic that was typical of Cole, to give them a tinge of evidence, an essential difference already evident to one of the first photographers working under Cole’s aesthetic influence: Carleton Watkins, whose sublime vision of the American West convinced Congress to preserve swathes of wilderness. While no thoughtful modern viewer would consider photography objective, photographs do record data as collected and recollected by the photographer. Like memories, they subsist between fact and fantasy. The ebb and flow between civilization and savagery depicted in Cole’s paintings can easily be dismissed as one man’s delusion. Dorfman’s photographic engagement with the “higher style of landscape” seeps deeper into the space where our own beliefs are created.

The photographs from the series, Sublime: The L.A. River, chronicle the Los Angeles River, an urban waterway that runs through the Western metropolis. The impetus behind these images was not to document the current state of the 51-mile river that was once the lifeblood of the early settlers and is now encased in concrete. In this body of work, the river is presented as metaphor, highlighting the ebb and flow between civilization and savagery, the cycle of social and cultural development, and the descent into ruin and back again. The multilayered photographs were constructed by means of intentional aesthetic decisions involving the combination of dozensâ&#x20AC;&#x201D;and sometimes hundredsâ&#x20AC;&#x201D;of individual details. The landscapes highlight the fraught relationship between the natural and the man-made. A bucolic wildlife scene that is reminiscent of 18th century landscape painting is littered with garbage and personal belongings. Hungry coyotes roam the concrete riverbed, sniffing at elaborate homeless encampments. Blue herons quietly stalk nourishment in the shallow waters next to a shoot for a car commercial.

The river, both disquieting and sublime, was my companion over the course of two years. These photographs, comprised of both original and historic imagery, are inspired by a very real place that is ultimately revealed as unreal, perhaps even surreal. Empire Falling, my previous series of reconstructed landscapes made in the American Midwest, marked my departure from portraiture that explored the cultural, social, and sexual practices of marginalized communities. Published works from selected exhibitions include The Pleasure Park, photographic stills and 3-channel video, 2009; Fandomania (Aperture, 2007); and Still Lovers (Channel, 2005) Elena Dorfman, Los Angeles, 2015

Copyright © 2015 Elena Dorfman www.elenadorfman.com All Rights Reserved. No part of this publication may be reproduced or transmitted in any form or by any means, electronic or mechanical, including photocopy, recording or any information storage and retrieval system, without prior permission in writing from the author. Copy Editor: Wendy Earl Design: Joshue Molina, www.joshuemolina.com Imagery: Elena Dorfman Text: Johnathon Keats Printed & Bound in the USA