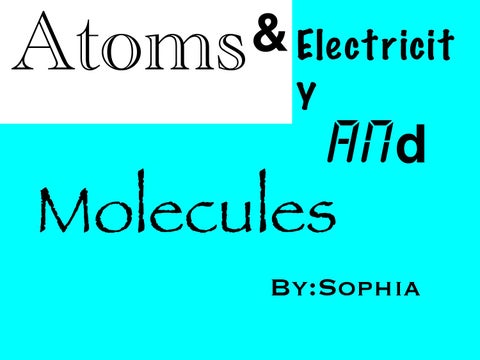 Atoms In this book, we are going to be talking about atoms, electricity ,and molecules. Atoms are all around you right now, in your house, in your bed, even in you! Look at the diagram of the atom (see right). See all those tiny little circles, those are protons, neutrons, and electrons.

Atoms are made up of proton, neutrons, and electrons. Protons are in the nucleus. The nucleus is in the middle of a atom. Protons (see left) have a positive charge. They are made up of smaller parts called quarks, in a proton there are only three quarks. The quarks are connected by other particles called gluons.

Neutrons (see right) have a neutral charge. They also have quarks and gluons and also are in the nucleus.

If you see in this picture electrons are very tiny, very very tiny. It takes a lot of electrons to equal one proton.

Molecules Now that we have talked about atoms, let's talk about molecules.

There are many different types of molecules. There is H2O, NaCl ( see right), Ch4. That's just a few, there are much more. 4

H2O is a water molecule. It has two hydrogen atoms and one oxygen.

There is also a hydronium molecule.

CH4 is a methane molecule.

Electricity Now let's talk about electricity. Electricity is the stuff that powers your computers, TV, phone, and much more.

The picture (see right) shows two light bulbs being lit up by one battery .

A plasma ball is also power by electricity.

In this picture, an electrical outlet is also powered by electricity.

The history of electricity The light bulb is also powered by electricity. Do you know who invented it? This man named Humphrey Davy invented it, but it did not last long. Later an inventor named Thomas Edison created a light bulb that lasted pretty long.

Have you ever heard about Ben Franklin and the kite? We'll, that story actually a myth which means it did not actually happen.

We'll now you know about atoms electricity and molecules and I hope you learned something and now this is the end of this book.

Did you know -That Humphrey Davy was the first to invent the light bulb -That there are more than 100 types of atoms -Water is made up of 2 hydrogen atoms and 1 oxygen atom, it is called H2O -Salt is made of a chorine atom and a sodium atom,it is called NaCl -Everything is made up of atoms, even you! -Protons are not the smallest things in the world, proton are made up of particles called quarks which are collected by gluons -In a atom the protons and neutrons are in the nucleus -The Benjamin Franklin kite thing was a myth

Discover about atoms, electricity, and molecules.