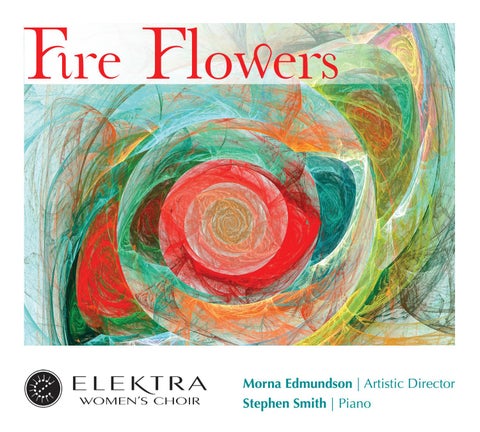 Elektra Women’s Choir from Vancouver, Canada has been a leader among women’s choirs since 1987. Under the direction of Artistic Director Morna Edmundson the 45-voice adult choir is known for adventurous programming, seeking out music written specifically for women and frequently commissioning new works. The choir is honoured to work with an outstanding accompanist, Dr. Stephen Smith. Elektra delivers its mandate to “inspire and lead” through an annual concert series including new and commissioned works and featuring outstanding guest artists. In addition to performing worthy repertoire from the past, Elektra has commissioned over 90 compositions and arrangements. The choir’s recordings on iTunes and CD Baby extend the reach of its repertoire internationally. Fire Flowers is Elektra’s 17th CD. Elektra’s website offers a permanent repertoire resource featuring all works programmed by the choir to date. Elektra’s celebrated outreach programs encourage, train, and mentor the next generation of youth and adults: singers, conductors, and composers. A multiple national prize-winning ensemble, Elektra has been honoured to perform at conferences of Choral Canada, the American Choral Directors Association, Chorus America, the International Society for Music Education, and the International Federation for Choral Music. Elektra participates enthusiastically in shared projects with other arts organizations, festivals, and concert series. In July 2017, Elektra was one of two choirs representing Canada at the World Symposium on Choral Music, in Barcelona, Spain. In the summer of 2018, Elektra was one of five choirs from across the country to perform in &quot;…float…&quot;, Choral Canada’s unique, outdoor immersive performance experience, funded by the Canada Council’s New Chapter program.

Morna Edmundson is one of Canada’s best-known choral conductors with a strong reputation for excellence. Passionate since childhood about choral singing, she obtained degrees and diplomas in vocal music in Vancouver, Bellingham, and Stockholm, Sweden where her teachers included Eric Ericson. In 1987, she co-founded Elektra Women’s Choir with Diane Loomer, a treasured partnership that lasted 22 years. In 2009, Morna became Elektra’s sole Artistic Director, continuing the choir’s strong leadership role in concert presentation, commissioning, recording, and mentorship. In addition to her work with Elektra, Morna is the Artistic Director of EnChor, a Vancouver-based auditioned choir for mature voices. For 14 years Morna shared her love of quality repertoire with a new generation of singers in her role as Associate Artistic Director of Coastal Sound Music Academy, where she was Music Director of the mixed-voice Youth Chamber Choir. Morna has adjudicated in North America and Asia, conducted honour choirs in several states, co-directed the American Choral Directors Association National Women’s Honour Choir, and gives frequent workshops with choirs of all ages. In 2000, she was presented with the Healey Willan Award for outstanding service to the BC Choral Federation, an organization she serves as a member of the President’s Advisory Council. In 2009, Morna was a recipient of the BC Community Achievement Award, which recognized her gifted organizational talent, leadership by example, and her encouragement of others to pursue their musical and choral goals. In 2011, Morna received a YWCA Woman of Distinction award in recognition of her work with Elektra. Since 2013, Morna has served on the board of Chorus America, the advocacy, research, and leadership development organization that gives voice to the choral field. Stephen Smith grew up in rural Nova Scotia, where he sang and played the piano from an early age. After initial studies in his home province in both piano and organ, he attended the Royal Northern College of Music in Manchester, England. While there, he participated in national and international competitions and won numerous awards and distinctions. Since 1990, Stephen has lived in Vancouver, obtaining his doctoral degree in piano performance from the University of British Columbia, and contributing to the musical life of the city as a performer, teacher, conductor, composer and arranger. Central to Stephen’s career is his long-standing relationship with some of Vancouver’s finest choral groups. In addition to his work with Elektra (which he has accompanied since 2001), he is also resident accompanist of the Vancouver Men’s Chorus, pianist for the Vancouver Bach Choir, and a frequent collaborator with Chor Leoni Men’s Choir, the Vancouver Chamber Choir, and many other ensembles. Stephen is also a published composer and arranger of choral music, with a long and growing list of commissions from individual choirs across North America, and from such entities as the British Columbia Choral Federation, the Women’s Commissioning Consortium of the ACDA, and the Canadian Broadcasting Corporation. Stephen’s work as both composer and pianist can be heard on dozens of CDs in commercial release, including a solo recording of classical piano miniatures entitled &quot;Kaleidoscope,&quot; which is available on iTunes.

Sicut lilium inter spinas sic amica mea inter filia. As the lily among thorns, so is my love among the daughters.

Had I the thrush’s throat, I could not sing you Songs sweeter than his own. And I’m too poor To lay the gifts that other lovers bring you Low at your silver door. Such as I have, I give. See, for your taking Tired hands are here, and feet grown dark with dust. Here’s a lost hope, and here a heart whose aching Grows greater than its trust. Sleep on, you will not hear me. But to-morrow You will remember in your fragrant ways, Finding the voice of twilight and my sorrow Lovelier than all men’s praise.

Somewhere there must be the first harmonic sound, somewhere in the vastness of nature, hidden. It is in its mighty spread and breadth, in the distances between galaxies, it is in the brilliance of the sun, in tiny flowers, in breezes through forests, in a mother’s voice speaking music of the heart or in the water of tears — somewhere there must be eternal life, somewhere the first harmonic sound is there to be found: how else could it have appeared into the heart of a human being as — music?

5) So Hallowed Is That Time

6) Voices of the Universe

Poem: Proud Music of the Storm

Some say that ever ‘gainst that season comes Wherein our Savior’s birth is celebrated, The bird of dawning singeth all night long, And then they say no spirit dare stir abroad, The nights are wholesome, then no planets strike, No fairy takes, nor witch hath power to charm, So hallowed and so gracious is that time.

Give me to hold all sounds, (I, madly struggling, cry,) Fill me with all the voices of the universe, Endow me with their throbbings—Nature’s also, The tempests, waters, winds—operas and chants— marches and dances, Utter— pour in—for I would take them all.

Hoson zês, phainou, Mêden holôs su lupou; Pros oligon esti to zên, To telos ho chronos apaitei. For as long as you live, shine, Do not be distressed in any way; Life exists for a short while, And Time demands its due.

Born with the moon in Cancer Choose her a name she will answer to Call her green and the winters cannot fade her Call her green for the children who’ve made her Little green, be a gypsy dancer

He went to California Hearing that everything’s warmer there So you write him a letter and say &quot;Her eyes are blue&quot; He sends you a poem and she’s lost to you Little green he’s a non-conformer Just a little green Like the color when the spring is born There’ll be crocuses to bring to school tomorrow Just a little green Like the nights when the Northern lights perform There’ll be icicles and birthday clothes And sometimes there’ll be sorrow Child with a child pretending Weary of lies you are sending home So you sign all the papers in the family name You’re sad and you’re sorry but you’re not ashamed Little green, have a happy ending

And only where the forest fires have sped, Scorching relentlessly the cool north lands, A sweet wild flower lifts its purple head, And, like some gentle spirit sorrow-fed, It hides the scars with almost human hands. And only to the heart that knows of grief, Of desolating fire, of human pain, There comes some purifying sweet belief, Some fellow-feeling beautiful, if brief. And life revives, and blossoms once again.

11) Spring Shall Bloom Poem: Amen by Christina Rossetti (1830-1894) Composer: Susan LaBarr Publisher: Santa Barbara Music Publishing, Inc., SBMP1311 It is over. What is over? Nay, now much is over truly. Harvest days we toiled to sow for; Now the sheaves are gathered newly, Now the wheat is garnered duly. It is finished. What is finished? Much is finished known or unknown: Lives are finished; time diminished; Was the fallow field left unsown? Will these buds be always unblown? It suffices. What suffices? All suffices reckoned rightly: Spring shall bloom where now the ice is, Roses make the bramble sightly, And the quickening sun shine brightly, And the latter wind blow lightly, And my garden teem with spices.