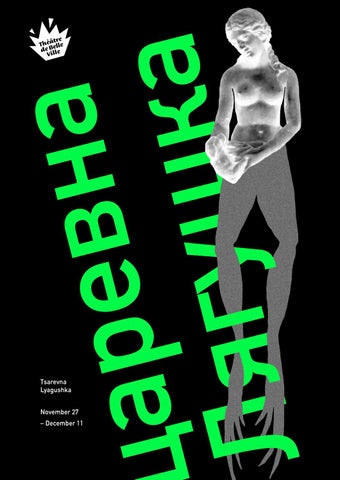 Tsar evna Lya gush ka Tsarevna Lyagushka depicts a harrowing story of Vasilisa the Wise, a women as fair as the sky at dawn, the fairest maiden ever born. In the tales it was proclaimed she was beautiful beyond description. Vasilisa was born wiser than her own father, which he envied, condemning her by promising her hand to Kostshei the Deathless. Refusing to marry Kostshei, he curses Vasilisa Kostshei the Immortal loved you as you were, now we will see if anyone can love you as you have become. As a frog you shall live, returning to human form only at the dark of night. Remain thus for three years and three days and then you may return and accept my proposal. For now hop away. To thus once with you. Now cursed Vasilisa awaits her fate.

“My dear boys, take each of you an arrow, draw your strong bow and let your arrow fly; in whatever court it falls, in that court there will be a wife for you.” Destiny comes in the form of an arrow, released by Tsarevich Ivan in search of a wife as directed by his father the Tsar. Vasilisa is found by Tsarevich Ivan, arrow in hand. Marry me for it is your destiny. Whilst his brothers marry merchant’s and noblemen’s daughters, the youngest son Ivan, disappointed by fates unfolding is set to marry a frog. Little does he yet know that this frog is Vasilisa the Wise, beautiful beyond description. Vasilisa’s talents remain hidden until the Tsar requests each of the wives to complete tasks to test their skills. In hopes of uplifting Tsarevich Ivan’s spirits and proving her worth Vasilisa comforts the prince each time his father sets a new challenge, encouraging him to go to bed early, as all will be right in the morning. Don’t be downhearted, Prince Ivan. Go to bed; night is the mother of counsel. In the dark of night Vasilisa returns to her human form to call on the forest for assistance in crafting exquisite artefacts to earn the respect of all that underestimate her. “It looks as though we had laughed at Prince Ivan’s wife for nothing -- it seems she is not a frog, but a sorceress.” In some editions the two elder brothers discover the truth behind Vasilsa’s curse, but yet Ivan does not see it. In light of Vasilisa’s triumphs the Tsar holds a feast, telling each of his sons to bring their wives to present to be presented to him. The thought of his frog wife attending a banquet made Prince Ivan feel far from cheerful, and he returned home with his head hanging. Once again this brings Ivan great shame , but Vasilisa still comforts him none the less, hatching a plan she shares with the Prince. It is not so bad after all, and might be much worse, Thou shalt go alone and I will follow thee. When thou hearest a noise, a great noise, do not be afraid; simply say: ‘There is my miserable froggy coming in her miserable box.’

Showing faith to her word, the Prince goes to the feast alone and awaits his wife. This prompts comments and unkind words from his brothers, but Tsarevich Ivan brushes off these words. Why didst thou not bring thy wife along with thee? Was there no rag to cover her? Where couldst thou have gotten such a beauty? We are ready to wager that in all the swamps in the dominion of our father it would be hard to find another one like her Unwittingly to the Prince, Vasilisa arrives only once dark falls. With a great clap of thunderous noise she arrives in an extravagant golden carriage, led by six pure white horses, Vasilisa in her human form, beautiful beyond all description. The guests stop and stare at the beauty before them, this time Prince Ivan takes the led retelling the line he was given to reassure the guests, and leading Vasilisa to the great feast table, with no doubt astonishment yet great satisfaction on his face. As the feasting comes to an end Vasilisa the Wise decides to dazzle her guests, discreetly putting the last drops of her wine and the bones of the swans in each of her sleeves.

When the long, hearty dinner was over, the guests began dancing and singing. The beautiful Vasilssa came forward, as bright as a star, bowed to her sovereign, bowed to the honourable guests and danced with her husband, the happy Tsarevich Ivan. It is said that Vasilisa danced as though she glided on thin air, her movements more graceful than any other. Whilst dancing she waved her left sleeve and a vast lake appeared in the midst of the hall, it glistened and glimmered. She waved her right sleeve and glorious white swans swam on the water. She glamoured and charmed her Tsar and his guests. Her two sisters-in-law mimicked her actions and only splashed the guests with wine and flung swan bones from their sleeves. Enraging the Tsar, having them thrown from the banquet with no honour. Tsarevich Ivan thought this a good time to slip away unseen. Off home he rushes to find the frog skin, burning it in the fire.

“Izb ushka! Izbushka!” Prince Ivan had learnt to trust the word of a promise, helping these creatures without a second thought. Towards the end of his journey the ball of yarn rolled into a forest, and there stood a little hut on hen’s feet, turning round and round. “Izbushka! Izbushka!”—for so in Russia do they name small huts—”Izbushka, I want thee to turn thy front to me,” cried Ivan, and lo! the tiny hut turned its front at once. Tsarevich Ivan entered the hut and there on the stove sat Bába-Yagá. With her legs of bone, her chin resting on the shelf above the stove, and her nose pressed up against the ceiling. It is this Bába-Yagá that informs Ivan on how to defeat Kostshei the Deathless.

For Kostshei’s death can be found on the tip of a need, this needle is in an egg, the egg is in a duck, the duck is in a hare, the hare is sitting in a stone chest, and this chest is in the crown of a lofty oak, that Kostshei guards as the apple of his eye. Bába-Yagá guides Tsarevich Ivan to the tall oak and he sets off on this impossible task. When he reaches the oak after walking for a time that is hard to know, he feels despair as there is no way he could reach this chest in the tall oak tree. Suddenly, up came the bear whose life he had spared, and pulled the tree out, roots and all. Down fell the casket and broke open. Out of the casket sprang a hare and scampered off as fast as it could. The other hare, whose life Prince Ivan had spared, gave chase, caught it and tore it to bits. Out of the dead hare flew a duck, and shot high into the sky. But in a twinkling, the drake, whose life Prince Ivan had spared, was at it. The duck dropped the egg, and down it fell into the blue sea. At this Prince Ivan wept bitter tears. How could he find the egg in the sea? This is where the promise of the Pike Ivan saved came into action. Swimming up to the shore with the egg in its mouth. Price Ivan finally breaks open the egg, takes out the needle and sets about breaking off the tip. As he bends and twists the tip off Koshchei the Deathless writhes and screams, but all in vain. As Prince Ivan breaks off the tips the needle and Koshchei falls down dead. Vasilisa knows the moment she is freed by Koshchei’s death and leaves his castle, running out to meet Tsarevich Ivan, kissing him deeply. Prince Ivan and Vasilisa the Wise went back to their own home and lived in peace and happiness to a ripe old age.

This digital publication is a collateral piece for the theatre show adaption of Tsarevna Lyagushka (The Frog Princess), it includes an abridged version of the traditional Russian Folklore story and original and unique artwork that accompanies the story.