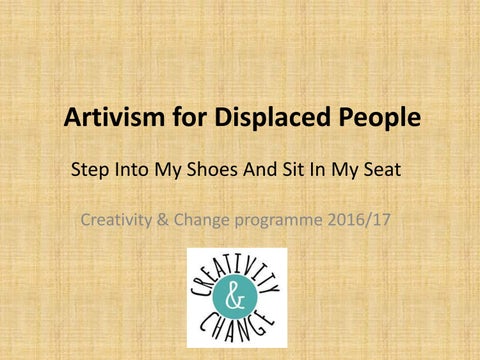 Artivism for Displaced People Step Into My Shoes And Sit In My Seat Creativity &amp; Change programme 2016/17

We chose the butterfly as a positive symbol of migration

Main aims of our outside intervention • Raise the level of awareness of displaced people, both globally and locally through sharing facts and figures about the people displaced. • Disseminate some facts and figures about the Direct Provision “industry” in Ireland today • Plant seeds of thought that displaced people are not necessarily a threat to jobs or livelihood • Increase empathy and a rational response to the presence of “the other” in our communities • Bust the “victim” status and stereotype

The set up 1. Three 8x4 ft boards set up in a U shape with the title Sit In My Seat 2. A peg line set up with triangles of coloured paper 3. A chalked image on the pavement showing the size of a typical room within a Direct Provision centre in Ireland, with bed and other furniture outlined. 4. Paper foot prints on the ground with an invitation to Step Into My Shoes 5. We also set up a Facebook event to share and invited people to join us on the street.

The boards contained (2): • details on the right to work of asylum seekers across Europe and how the Irish laws differ • butterfly images to signify the naturalness of migration (though not enforced displacement) • a set of cards containing details of real individuals who have been through the DP system in Ireland. Names, countries of origin, number of children etc • two stools for guests to sit on and reflect on the personal stories with the legend Sit In My Seat above them

Peg line A peg line set up with triangles of coloured paper with the invitation to: â&amp;#x20AC;˘ leave a message of hope for asylum seekers â&amp;#x20AC;˘ record the intention of a positive action they might take to make a difference

It was a sunny day with high footfall so we met a lot of people in the two hours on the street.

Impacts on Knowledge: • One of the main impacts was raising awareness of the Direct Provision “industry” in Ireland. Many people we engaged with had no idea that it was a profit driven system and were shocked by that. This impact came mostly from conversations we had with people who stopped but also through exposition of the written facts and figures. • People were also shocked to see that Ireland is so different to other European countries in terms of allowing people to work while they are seeking asylum. This impact was clearly linked to the map with facts we had displayed.

Impacts on Attitude/Values • The chalked room dimensions stimulated people to engage more personally with the lived experience of the system. They could imagine themselves trying to exist in such a space over periods of up to 14 years. • The written descriptions of real people’s experience within the Direct Provision system had a powerful emotional impact and stimulated a deep human-tohuman response. • People with direct experience of the asylum seeking system engaged with us and expressed their appreciation.

Impact on Behaviour The peg line with paper bunting encouraged people to engage positively and think about what they could do personally to help achieve change. Actions recorded were: • 1:1 buddying with residents in Direct Provision • Connection with established support groups • Inclusion of details about Direct Provision in a forthcoming rap song • Aim to have more conversations with asylum seekers • Many well wishes and expressions of support were also recorded.

About Creativity and Change •

CIT CCAD’s Creativity &amp; Change programme is about creativity and its power to ignite empathy, passion and learning about our interconnected and interdependent world. It is about imagining more humane, just and viable ways to live in the world. It connects how we think, live and act in the world and considers how we can live as connected global citizens becoming part of the changes we want to see in the world. This programme is for artists, community workers, youth workers, activist’s educators, volunteers and anyone who is interested in exploring the connection between creativity, learning and change. With in the programme participants engage in live projects developing, exchanging and testing processes and ideas to engage others with their sense of Global citizenship and global justice themes. Creativity and Change offers a number of modes of engagement, from accredited awards, international residential programmes and taster courses to continued professional development events.

Description of an outdoor intervention in Cork city exploring and communicating issues around displacement in a global, European and Irish context. Part of the CIT CCAD Creativity and Change Programme 2016-2017.