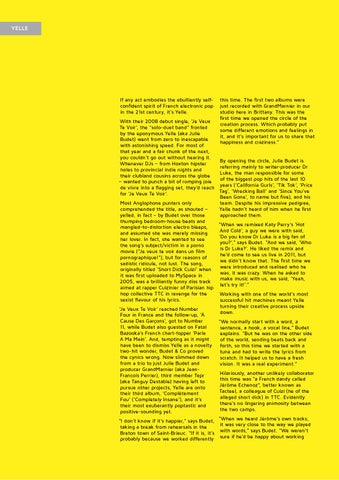 If any act embodies the ebulliently selfconfident spirit of French electronic pop in the 21st century, it’s Yelle.

this time. The first two albums were just recorded with GrandMarnier in our studio here in Brittany. This was the first time we opened the circle of the creation process. Which probably put some different emotions and feelings in it, and it’s important for us to share that happiness and craziness.”

With their 2008 debut single, ‘Je Veux Te Voir’, the “solo-duet band” fronted by the eponymous Yelle (aka Julie Budet) went from zero to inescapable with astonishing speed. For most of that year and a fair chunk of the next, you couldn’t go out without hearing it. By opening the circle, Julie Budet is Whenever DJs – from Hoxton hipster referring mainly to writer-producer Dr holes to provincial indie nights and Luke, the man responsible for some their clubland cousins across the globe of the biggest pop hits of the last 10 – wanted to punch a bit of romping joie years (‘California Gurls’, ‘Tik Tok’, ‘Price de vivre into a flagging set, they’d reach Tag’, ‘Wrecking Ball’ and ‘Since You’ve for ‘Je Veux Te Voir’. Been Gone’, to name but five), and his Most Anglophone punters only team. Despite his impressive pedigree, comprehended the title, as shouted – Yelle hadn’t heard of him when he first yelled, in fact – by Budet over those approached them. thumping bedroom-house beats and “When we remixed Katy Perry’s ‘Hot mangled-to-distortion electro bleeps, And Cold’, a guy we were with said, and assumed she was merely missing ‘Do you know Dr Luke is a big fan of her lover. In fact, she wanted to see you?’,” says Budet. “And we said, ‘Who the song’s subject/victim in a porno is Dr Luke?’. He liked the remix and movie (“Je veux te voir dans un film he’d come to see us live in 2011, but pornographique!”), but for reasons of we didn’t know that. The first time we sadistic ridicule, not lust. The song, were introduced and realised who he originally titled ‘Short Dick Cuizi’ when was, it was crazy. When he asked to it was first uploaded to MySpace in make music with us, we said, ‘Yeah, 2005, was a brilliantly funny diss track let’s try it!’.” aimed at rapper Cuizinier of Parisian hip hop collective TTC in revenge for the Working with one of the world’s most sexist flavour of his lyrics. successful hit machines meant Yelle turning their creative process upside ‘Je Veux Te Voir’ reached Number down. Four in France and the follow-up, ‘À Cause Des Garçons’, got to Number “We normally start with a word, a 11, while Budet also guested on Fatal sentence, a hook, a vocal line,” Budet Bazooka’s French chart-topper ‘Parle explains. “But he was on the other side A Ma Main’. And, tempting as it might of the world, sending beats back and have been to dismiss Yelle as a novelty forth, so this time we started with a two-hit wonder, Budet & Co proved tune and had to write the lyrics from the cynics wrong. Now slimmed down scratch. It helped us to have a fresh from a trio to just Julie Budet and vision. It was a real experiment.” producer GrandMarnier (aka JeanHilariously, another unlikely collaborator Francois Perrier), third member Tepr this time was “a French dandy called (aka Tanguy Destable) having left to Jérôme Echenoz”, better known as pursue other projects, Yelle are onto Tacteel, a colleague of Cuizi (he of the their third album, ‘Complètement alleged short dick) in TTC. Evidently Fou’ (‘Completely Insane’), and it’s there’s no lingering animosity between their most exuberantly poptastic and the two camps. positive-sounding yet. “I don’t know if it’s happier,” says Budet, “When we heard Jérôme’s own tracks, it was very close to the way we played taking a break from rehearsals in the Breton town of Saint-Brieuc. “If it is, it’s with words,” says Budet. “We weren’t probably because we worked differently sure if he’d be happy about working 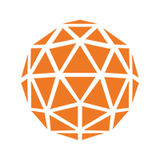