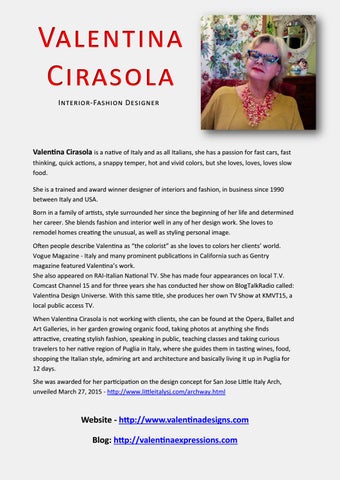 Valentina Cirasola is a native of Italy and as all Italians, she has a passion for fast cars, fast thinking, quick actions, a snappy temper, hot and vivid colors, but she loves, loves, loves slow food. She is a trained and award winner designer of interiors and fashion, in business since 1990 between Italy and USA. Born in a family of artists, style surrounded her since the beginning of her life and determined her career. She blends fashion and interior well in any of her design work. She loves to remodel homes creating the unusual, as well as styling personal image. Often people describe Valentina as “the colorist” as she loves to colors her clients’ world. Vogue Magazine - Italy and many prominent publications in California such as Gentry magazine featured Valentina’s work. She also appeared on RAI-Italian National TV. She has made four appearances on local T.V. Comcast Channel 15 and for three years she has conducted her show on BlogTalkRadio called: Valentina Design Universe. With this same title, she produces her own TV Show at KMVT15, a local public access TV. When Valentina Cirasola is not working with clients, she can be found at the Opera, Ballet and Art Galleries, in her garden growing organic food, taking photos at anything she finds attractive, creating stylish fashion, speaking in public, teaching classes and taking curious travelers to her native region of Puglia in Italy, where she guides them in tasting wines, food, shopping the Italian style, admiring art and architecture and basically living it up in Puglia for 12 days. She was awarded for her participation on the design concept for San Jose Little Italy Arch, unveiled March 27, 2015 - http://www.littleitalysj.com/archway.html 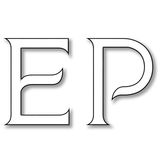