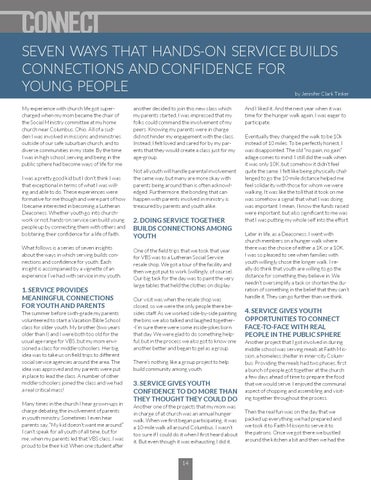 My experience with church life got supercharged when my mom became the chair of the Social Ministry committee at my home church near Columbus, Ohio. All of a sudden I was involved in missions and ministries outside of our safe suburban church, and to diverse communities in my state. By the time I was in high school, serving and being in the public sphere had become ways of life for me. I was a pretty good kid but I don’t think I was that exceptional in terms of what I was willing and able to do. These experiences were formative for me though and were part of how I became interested in becoming a Lutheran Deaconess. Whether youth go into churchwork or not, hands-on service can build young people up by connecting them with others and bolstering their confidence for a life of faith. What follows is a series of seven insights about the ways in which serving builds connections and confidence for youth. Each insight is accompanied by a vignette of an experience I’ve had with service in my youth.

1. SERVICE PROVIDES MEANINGFUL CONNECTIONS FOR YOUTH AND PARENTS The summer before sixth-grade my parents volunteered to start a Vacation Bible School class for older youth. My brother (two years older than I) and I were both too old for the usual age range for VBS, but my mom envisioned a class for middle-schoolers. Her big idea was to take us on field trips to different social service agencies around the area. The idea was approved and my parents were put in place to lead the class. A number of other middle-schoolers joined the class and we had a real critical mass! Many times in the church I hear grown-ups in charge debating the involvement of parents in youth ministry. Sometimes I even hear parents say, “My kid doesn’t want me around.” I can’t speak for all youth of all time, but for me, when my parents led that VBS class, I was proud to be their kid. When one student after

another decided to join this new class which my parents started, I was impressed that my folks could command the involvement of my peers. Knowing my parents were in charge did not hinder my engagement with the class. Instead, I felt loved and cared for by my parents that they would create a class just for my age-group. Not all youth will handle parental involvement the same way, but many are more okay with parents being around than is often acknowledged. Furthermore, the bonding that can happen with parents involved in ministry is treasured by parents and youth alike.

2. DOING SERVICE TOGETHER BUILDS CONNECTIONS AMONG YOUTH One of the field trips that we took that year for VBS was to a Lutheran Social Service resale shop. We got a tour of the facility and then we got put to work (willingly, of course). Our big task for the day was to paint the very large tables that held the clothes on display. Our visit was when the resale shop was closed, so we were the only people there besides staff. As we worked side-by-side painting the bins we also talked and laughed together-I’m sure there were some inside-jokes born that day. We were glad to do something helpful, but in the process we also got to know one another better and began to gel as a group.

And I liked it. And the next year when it was time for the hunger walk again, I was eager to participate. Eventually they changed the walk to be 10k instead of 10 miles. To be perfectly honest, I was disappointed. The old “no pain, no gain” adage comes to mind. I still did the walk when it was only 10K, but somehow it didn’t feel quite the same. I felt like being physically challenged to go the 10-mile distance helped me feel solidarity with those for whom we were walking. It was like the toll that it took on me was somehow a signal that what I was doing was important. I mean, I know the funds raised were important, but also significant to me was that I was putting my whole self into the effort. Later in life, as a Deaconess, I went with church members on a hunger walk where there was the choice of either a 1K or a 10K. I was so pleased to see when families with youth willingly chose the longer walk. I really do think that youth are willing to go the distance for something they believe in. We needn’t oversimplify a task or shorten the duration of something in the belief that they can’t handle it. They can go further than we think.

3. SERVICE GIVES YOUTH CONFIDENCE TO DO MORE THAN THEY THOUGHT THEY COULD DO

Another project that I got involved in during middle school was serving meals at Faith Mission, a homeless shelter in inner-city Columbus. Providing the meals had two phases, first a bunch of people got together at the church a few days ahead of time to prepare the food that we would serve. I enjoyed the communal aspect of chopping and assembling and visiting together throughout the process.

Another one of the projects that my mom was in charge of at church was an annual hunger walk. When we first began participating, it was a 10-mile walk all around Columbus. I wasn’t too sure if I could do it when I first heard about it. But even though it was exhausting I did it.

Then the real fun was on the day that we packed up everything we had prepared and we took it to Faith Mission to serve it to the patrons. Once we got there we bustled around the kitchen a bit and then we had the

There’s nothing like a group project to help build community among youth. 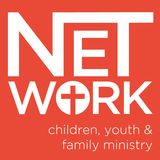