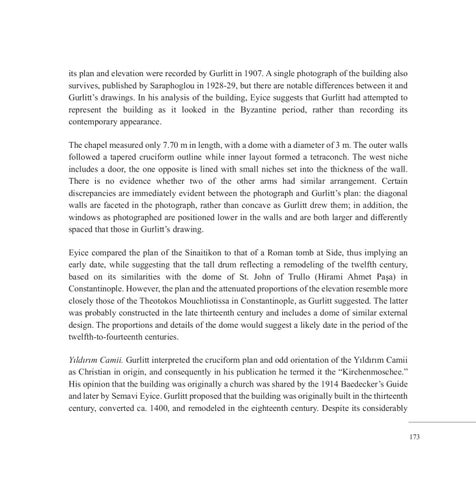 its plan and elevation were recorded by Gurlitt in 1907. A single photograph of the building also survives, published by Saraphoglou in 1928-29, but there are notable differences between it and Gurlitt’s drawings. In his analysis of the building, Eyice suggests that Gurlitt had attempted to represent the building as it looked in the Byzantine period, rather than recording its contemporary appearance. The chapel measured only 7.70 m in length, with a dome with a diameter of 3 m. The outer walls followed a tapered cruciform outline while inner layout formed a tetraconch. The west niche includes a door, the one opposite is lined with small niches set into the thickness of the wall. There is no evidence whether two of the other arms had similar arrangement. Certain discrepancies are immediately evident between the photograph and Gurlitt’s plan: the diagonal walls are faceted in the photograph, rather than concave as Gurlitt drew them; in addition, the windows as photographed are positioned lower in the walls and are both larger and differently spaced that those in Gurlitt’s drawing. Eyice compared the plan of the Sinaitikon to that of a Roman tomb at Side, thus implying an early date, while suggesting that the tall drum reflecting a remodeling of the twelfth century, based on its similarities with the dome of St. John of Trullo (Hirami Ahmet Pasa) in Constantinople. However, the plan and the attenuated proportions of the elevation resemble more closely those of the Theotokos Mouchliotissa in Constantinople, as Gurlitt suggested. The latter was probably constructed in the late thirteenth century and includes a dome of similar external design. The proportions and details of the dome would suggest a likely date in the period of the twelfth-to-fourteenth centuries. Yıldırım Camii. Gurlitt interpreted the cruciform plan and odd orientation of the Yıldırım Camii as Christian in origin, and consequently in his publication he termed it the “Kirchenmoschee.” His opinion that the building was originally a church was shared by the 1914 Baedecker’s Guide and later by Semavi Eyice. Gurlitt proposed that the building was originally built in the thirteenth century, converted ca. 1400, and remodeled in the eighteenth century. Despite its considerably 173

The Byzantine Monuments of the Evros / Meriç River Valley 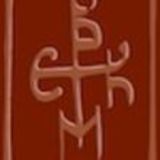