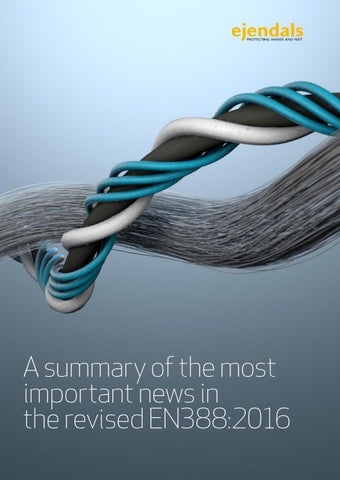 A summary of the most important news in the revised EN388:2016

PROTECTIVE GLOVES AGAINST MECHANICAL RISKS EN 388:2016 This pictogram shows that the glove is intended to protect against mechanical risks.

Changes have been made in EN388:2016. However, much remains the same. Testing of resistance to abrasion, tear and puncture are carried out as before but with some clarifications regarding test procedure and test materials. For example it is now mandatory to use a specified sandpaper during abrasion test. Gloves that earlier been tested with less harsh sandpaper can experience lower abrasion result when testing according to EN 388:2016. The obtained test results corresponds to different levels of protection in the same way as in the 2003 version, which for resistance to abrasion, tear and puncture is 0â&#x20AC;&#x201C;4, with 4 being the highest performance level. The major differences in the new edition compared to the previous is related to cut resistance and impact protection. There are now two methods available for testing the cut resistance and the standard clearly states that there is no correlation between the old and new cut test methods. For details, see the table on the next page.

a) Resistance to abrasion (No. of revolutions)

b) Resistance to cutting (Index)

CHANGES RELATED TO CUT PROTECTION IN EN 388:2016 The new added test method is described in the standard EN ISO 13997. The testmethod is also called â&#x20AC;&#x2DC;TDMâ&#x20AC;&#x2122; which is an abbreviation for the equipment in use: tomodynamometer. There are two variables in the TDM test; applied force (Newton) and distance in millimeters, describing how far the blade can move before it cuts through the glove material. The test sample from the glove is cut diagonally. Before each cut a new test area is prepared, the blade is changed and specific force in Newton applied. Different forces causing the blade to move different lengths before it cuts through. The higher force the shorter distance before cutting through the glove material.

Several tests are carried out and each specific force correlates to a measurement in millimeters. A chart is created based on the different forces in the form of Newton values (x) and length in mm where the glove breaks (y). The test result is the Newton value needed to cut through the glove material at 20 mm. The highest cut protection level is F, which corresponds to 30 Newtons. 50 45 40 35 30 25 20 15 10 5 0

Final total result in example: 8,6 Newton Result from one cut with a specific Newton value

Shows how test sample is cut out from glove.

Result for one cut.

The only test method used in the previous version of EN388, is called Coup method. It remains but is now only to be used for materials that do not affect the sharpness of the blade. First a reference material is tested, followed by the glove material and then the reference material is tested again. These three tests are made with the same knife blade going back and forth at a constant force. In EN 388:2016 Coup test the blade used is somewhat sharper, which can result in lower cut index compared to EN 388:2003.

Test sample of glove in the sample holder.

CHANGES RELATED TO IMPACT PROTECTION IN EN 388:2016 Impact protection verification has been added to the EN 388:2016. The test method is taken from the motorcycle standard EN 13594:2015. The area where the impact protection is claimed is to be tested, but due to technical reasons, the area around the fingers cannot be tested. With an impact energy of 5 Joule, the transmitted force should be equal or less than 9 kN for a single hit and average should be equal or less than 7 kN. If the requirements are fulfilled the glove will be marked with a â&#x20AC;&#x153;Pâ&#x20AC;? (Pass). If fail no marking.