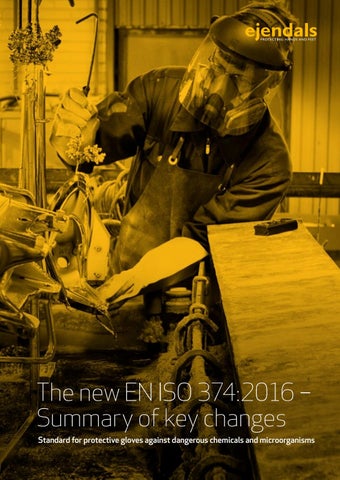 A new standard to reflect industry changes The European standard for gloves intended to protect against chemicals and microorganisms has been revised and updated. The new standard was published in 2017 and supersedes EN374-1:2003. For the consumer, the change will only be seen as a new label on products. Note that it is still important to consult the manufacturer regarding the application of the gloves. A risk assessment of the workplace activity must always be carried out, taking specific working conditions into account in order to identify the exact protection requirements. THE CHANGES IN BRIEF • There are now three levels of protection for gloves: Type A, B and C. Gloves will be labelled accordingly with new pictograms. • A further six chemicals have been added to the existing chemical list. • If virus protection is claimed, an additional test is required: ISO 374-5:2016. • The permeation method has changed from EN374-3:2004 to EN 16523-1:2015. • Degradation testing (EN374-4:2013) is now required for each tested chemical in the permeation test. • Gloves that do not provide mechanical protection are no longer required to be tested according to EN388.

NEW MARKINGS The beaker pictogram with the question mark has been removed from the new standard. This in combination with the extended chemical list will provide better knowledge of the gloves protection capacity. It will add to customer benefit as it will be easier to select the right chemical protection.

Type of glove Type A

NEW CHEMICALS TESTED The list of chemicals on which the gloves are tested has been expanded with a further six chemicals. Increasing numbers of chemicals are used in industrial applications, and some were not covered by the previous standard.

For gloves protecting against bacteria and fungi.

Reported as a percentage.

CUFF SAMPLING FOR LONGER GLOVES There have also been changes to the sampling requirements for gloves with protective cuffs. Three samples from the palm will be tested for all gloves. If the glove has a cuff that is 400mm or longer, then samples from the cuff will also be tested. The aim is to ensure that protective cuffs provide the same level of protection as the palm.