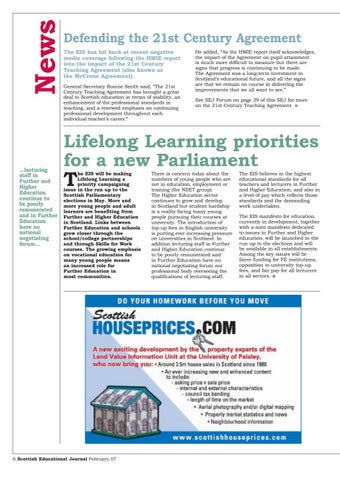 The EIS has hit back at recent negative media coverage following the HMIE report into the impact of the 21st Century Teaching Agreement (also known as the McCrone Agreement).

General Secretary Ronnie Smith said, “The 21st Century Teaching Agreement has brought a great deal to Scottish education in terms of stability, an enhancement of the professional standards in teaching, and a renewed emphasis on continuing professional development throughout each individual teacher’s career.”

He added, “As the HMIE report itself acknowledges, the impact of the Agreement on pupil attainment is much more difficult to measure but there are signs that progress is continuing to be made. The Agreement was a long-term investment in Scotland’s educational future, and all the signs are that we remain on course in delivering the improvements that we all want to see.”

See SEJ Forum on page 29 of this SEJ for more on the 21st Century Teaching Agreement.

he EIS will be making Lifelong Learning a priority campaigning issue in the run up to the Scottish Parliamentary elections in May. More and more young people and adult learners are benefiting from Further and Higher Education in Scotland. Links between Further Education and schools grow closer through the school/college partnerships and through Skills for Work courses. The growing emphasis on vocational education for many young people means an increased role for Further Education in most communities.

There is concern today about the numbers of young people who are not in education, employment or training (the NEET group). The Higher Education sector continues to grow and develop in Scotland but student hardship is a reality facing many young people pursuing their courses at university. The introduction of top-up fees in English university is putting ever increasing pressure on universities in Scotland. In addition lecturing staff in Further and Higher Education continue to be poorly remunerated and in Further Education have no national negotiating forum nor professional body overseeing the qualifications of lecturing staff.

The EIS believes in the highest educational standards for all teachers and lecturers in Further and Higher Education, and also in a level of pay which reflects those standards and the demanding work undertaken.

The EIS manifesto for education, currently in development, together with a mini manifesto dedicated to issues in Further and Higher education, will be launched in the run up to the elections and will be available in all establishments. Among the key issues will be fairer funding for FE institutions, opposition to university top-up fees, and fair pay for all lecturers in all sectors.