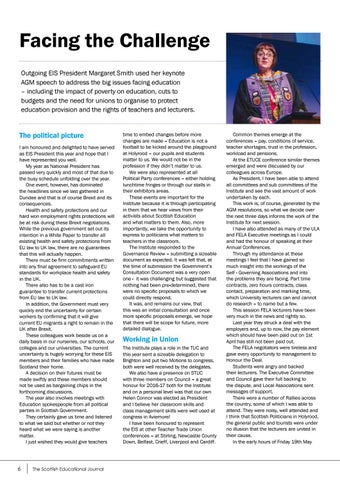 Facing the Challenge Outgoing EIS President Margaret Smith used her keynote AGM speech to address the big issues facing education – including the impact of poverty on education, cuts to budgets and the need for unions to organise to protect education provision and the rights of teachers and lecturers.

The political picture I am honoured and delighted to have served as EIS President this year and hope that I have represented you well. My year as National President has passed very quickly and most of that due to the busy schedule unfolding over the year. One event, however, has dominated the headlines since we last gathered in Dundee and that is of course Brexit and its consequences. Health and safety protections and our hard won employment rights protections will be at risk during these Brexit negotiations. While the previous government set out its intention in a White Paper to transfer all existing health and safety protections from EU law to UK law, there are no guarantees that this will actually happen. There must be firm commitments written into any final agreement to safeguard EU standards for workplace health and safety in the UK. There also has to be a cast iron guarantee to transfer current protections from EU law to UK law. In addition, the Government must very quickly end the uncertainty for certain workers by confirming that it will give current EU migrants a right to remain in the UK after Brexit. These colleagues work beside us on a daily basis in our nurseries, our schools, our colleges and our universities. The current uncertainty is hugely worrying for these EIS members and their families who have made Scotland their home. A decision on their futures must be made swiftly and these members should not be used as bargaining chips in the forthcoming discussions. The year also involves meetings with Education spokespeople from all political parties in Scottish Government. They certainly gave us time and listened to what we said but whether or not they heard what we were saying is another matter. I just wished they would give teachers

time to embed changes before more changes are made – Education is not a football to be kicked around the playground at Holyrood – our pupils and students matter to us. We would not be in the profession if they didn’t matter to us. We were also represented at all Political Party conferences – either holding lunchtime fringes or through our stalls in their exhibitors areas. These events are important for the Institute because it is through participating in them that we hear views from their activists about Scottish Education and what matters to them. Also, more importantly, we take the opportunity to express to politicians what matters to teachers in the classroom. The Institute responded to the Governance Review – submitting a sizeable document as expected. It was felt that, at the time of submission the Government’s Consultation Document was a very open one - it was challenging but suggested that nothing had been pre-determined, there were no specific proposals to which we could directly respond. It was, and remains our view, that this was an initial consultation and once more specific proposals emerge, we hope that there will be scope for future, more detailed dialogue.

Working in Union The Institute plays a role in the TUC and this year sent a sizeable delegation to Brighton and put two Motions to congress, both were well received by the delegates. We also have a presence on STUC with three members on Council – a great honour for 2016-17 both for the Institute and on a personal level was that our own Helen Connor was elected as President and I believe her classroom skills and class management skills were well used at congress in Aviemore! I have been honoured to represent the EIS at other Teacher Trade Union conferences – at Stirling, Newcastle County Down, Belfast, Crieff, Liverpool and Cardiff.

Common themes emerge at the conferences – pay, conditions of service, teacher shortages, trust in the profession, workload and pensions. At the ETUCE conference similar themes emerged and were discussed by our colleagues across Europe. As President, I have been able to attend all committees and sub committees of the Institute and see the vast amount of work undertaken by each. This work is, of course, generated by the AGM resolutions, so what we decide over the next three days informs the work of the Institute for next session. I have also attended as many of the ULA and FELA Executive meetings as I could and had the honour of speaking at their Annual Conferences. Through my attendance at these meetings I feel that I have gained so much insight into the workings of the Self - Governing Associations and into the problems they are facing. Part time contracts, zero hours contracts, class contact, preparation and marking time, which University lecturers can and cannot do research – to name but a few. This session FELA lecturers have been very much in the news and rightly so. Last year they struck a deal with the employers and, up to now, the pay element which should have been paid out on 1st April has still not been paid out. The FELA negotiators were tireless and gave every opportunity to management to Honour the Deal. Students were angry and backed their lecturers. The Executive Committee and Council gave their full backing to the dispute, and Local Associations sent messages of support. There were a number of Rallies across the country, some of which I was able to attend. They were noisy, well attended and I think that Scottish Politicians in Holyrood, the general public and tourists were under no illusion that the lecturers are united in their cause. In the early hours of Friday 19th May