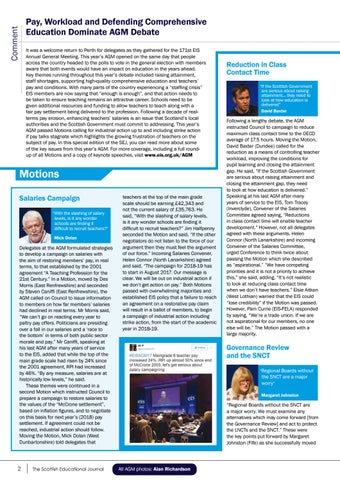 Pay, Workload and Defending Comprehensive Education Dominate AGM Debate It was a welcome return to Perth for delegates as they gathered for the 171st EIS Annual General Meeting. This year’s AGM opened on the same day that people across the country headed to the polls to vote in the general election with members aware that both events would have an impact on education in the years ahead. Key themes running throughout this year’s debate included raising attainment, staff shortages, supporting high-quality comprehensive education and teachers’ pay and conditions. With many parts of the country experiencing a “staffing crisis” EIS members are now saying that “enough is enough”, and that action needs to be taken to ensure teaching remains an attractive career. Schools need to be given additional resources and funding to allow teachers to teach along with a fair pay settlement being delivered to the profession. Following a decade of realterms pay erosion, enhancing teachers’ salaries is an issue that Scotland’s local authorities and the Scottish Government must commit to addressing. This year’s AGM passed Motions calling for industrial action up to and including strike action if pay talks stagnate which highlights the growing frustration of teachers on the subject of pay. In this special edition of the SEJ, you can read more about some of the key issues from this year’s AGM. For more coverage, including a full roundup of all Motions and a copy of keynote speeches, visit www.eis.org.uk/AGM

Motions Salaries Campaign “With the slashing of salary levels, is it any wonder schools are finding it difficult to recruit teachers?” Mick Dolan

Delegates at the AGM formulated strategies to develop a campaign on salaries with the aim of restoring members’ pay, in real terms, to that established by the 2001 agreement “A Teaching Profession for the 21st Century.” In a Motion, moved by Des Morris (East Renfrewshire) and seconded by Steven Caniffi (East Renfrewshire), the AGM called on Council to issue information to members on how far members’ salaries had declined in real terms. Mr Morris said, “We can’t go on reacting every year to paltry pay offers. Politicians are presiding over a fall in our salaries and a ‘race to the bottom’ in terms of both public sector morale and pay.” Mr Caniffi, speaking at his last AGM after many years of service to the EIS, added that while the top of the main grade scale had risen by 24% since the 2001 agreement, RPI had increased by 46%. “By any measure, salaries are at historically low levels,” he said. These themes were continued in a second Motion which instructed Council to prepare a campaign to restore salaries to the values of the “McCrone settlement”, based on inflation figures, and to negotiate on this basis for next year’s (2018) pay settlement. If agreement could not be reached, industrial action should follow. Moving the Motion, Mick Dolan (West Dunbartonshire) told delegates that

teachers at the top of the main grade scale should be earning £42,343 and not the current salary of £35,763. He said, “With the slashing of salary levels, is it any wonder schools are finding it difficult to recruit teachers?” Jim Halfpenny seconded the Motion and said, “If the other negotiators do not listen to the force of our argument then they must feel the argument of our force.” Incoming Salaries Convener, Helen Connor (North Lanarkshire) agreed and said, “The campaign for 2018-19 has to start in August 2017. Our message is clear. We will be out on industrial action if we don’t get action on pay.” Both Motions passed with overwhelming majorities and established EIS policy that a failure to reach an agreement on a restorative pay claim will result in a ballot of members, to begin a campaign of industrial action including strike action, from the start of the academic year in 2018-19.

Reduction in Class Contact Time “If the Scottish Government are serious about raising attainment... they need to look at how education is delivered” David Baxter

Following a lengthy debate, the AGM instructed Council to campaign to reduce maximum class contact time to the OECD average of 17.5 hours. Moving the Motion, David Baxter (Dundee) called for the reduction as a means of controlling teacher workload, improving the conditions for pupil learning and closing the attainment gap. He said, “If the Scottish Government are serious about raising attainment and closing the attainment gap, they need to look at how education is delivered.” Speaking at his last AGM after many years of service to the EIS, Tom Tracey (Inverclyde), Convener of the Salaries Committee agreed saying, “Reductions in class contact time will enable teacher development.” However, not all delegates agreed with these arguments. Helen Connor (North Lanarkshire) and incoming Convener of the Salaries Committee, urged Conference to think twice about passing the Motion which she described as “aspirational.” “We have competing priorities and it is not a priority to achieve this,” she said, adding, “It’s not realistic to look at reducing class contact time when we don’t have teachers.” Elsie Aitken (West Lothian) warned that the EIS could “lose credibility” if the Motion was passed. However, Pam Currie (EIS-FELA) responded by saying, “We’re a trade union. If we are not aspirational for our members, no one else will be.” The Motion passed with a large majority.

Governance Review and the SNCT “Regional Boards without

the SNCT are a major worry”

“Regional Boards without the SNCT are a major worry. We must examine any alternatives which may come forward [from the Governance Review] and act to protect the LNCTs and the SNCT.” These were the key points put forward by Margaret Johnston (Fife) as she successfully moved