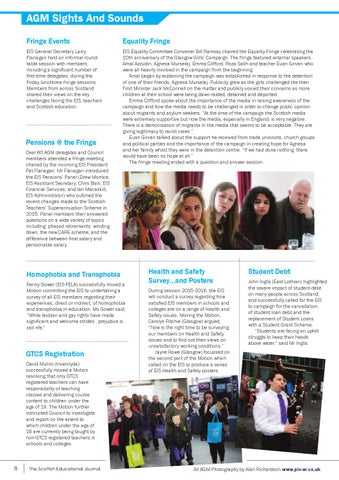 EIS General Secretary Larry Flanagan held an informal roundtable session with members, including a significant number of first-time delegates, during the Friday lunchtime fringe sessions. Members from across Scotland shared their views on the key challenges facing the EIS, teachers and Scottish education.

EIS Equality Committee Convener Bill Ramsay chaired the Equality Fringe celebrating the 10th anniversary of the Glasgow Girls’ Campaign. The fringe featured external speakers Amal Azzudin, Agnesa Murselaj, Emma Clifford, Roza Salih and teacher Euan Girvan who were all heavily involved in the campaign from the beginning. Amal began by explaining the campaign was established in response to the detention of one of their friends, Agnesa Murselaj. Publicity grew as the girls challenged the then First Minister Jack McConnell on the matter and publicly voiced their concerns as more children at their school were being dawn raided, detained and deported. Emma Clifford spoke about the importance of the media in raising awareness of the campaign and how the media needs to be challenged in order to change public opinion about migrants and asylum seekers. “At the time of the campaign the Scottish media were extremely supportive but now the media, especially in England, is very negative. There is a demonisation of migrants in the media that seems to be acceptable. They are giving legitimacy to racist views.” Euan Girvan talked about the support he received from trade unionists, church groups and political parties and the importance of the campaign in creating hope for Agnesa and her family whilst they were in the detention centre. “If we had done nothing, there would have been no hope at all.” The fringe meeting ended with a question and answer session.

Homophobia and Transphobia Penny Gower (EIS-FELA) successfully moved a Motion committing the EIS to undertaking a survey of all EIS members regarding their experiences, direct or indirect, of homophobia and transphobia in education. Ms Gower said, “While lesbian and gay rights have made significant and welcome strides…prejudice is still rife.”

GTCS Registration David Munro (Inverclyde) successfully moved a Motion resolving that only GTCS registered teachers can have responsibility of teaching classes and delivering course content to children under the age of 16. The Motion further instructed Council to investigate and report on the extent to which children under the age of 16 are currently being taught by non-GTCS registered teachers in schools and colleges.

Student Debt John Inglis (East Lothian) highlighted the severe impact of student debt on many people across Scotland, and successfully called for the EIS to campaign for the cancellation of student loan debt and the replacement of Student Loans with a Student Grant Scheme. “Students are facing an uphill struggle to keep their heads above water,” said Mr Inglis.