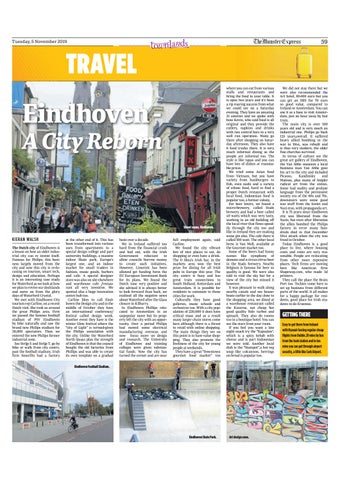 KIERAN WALSH The Dutch city of Eindhoven is a lesson on how an older industrial city can re invent itself. Famous for Philips, this business largely moved from the city and now this city is re-focusing on tourism, smart tech, design and education. Perhaps it is an interesting case study for Waterford as we look at how we plan to revive our docklands and move on from the glory days of Waterford Crystal. We met with Eindhoven City tourism rep Carline, on a recent Dutch visit. She took us around the great Philips area. First we passed the famous football stadium of PSV Eindhoven by bike naturally and saw the brand new Philips stadium for 38,000 spectators. Then we entered the new Philips former industrial zone. See Strijp S and Strijp T, go by bike or walk from city centre, past the football stadium. Irish firm Smurfits had a factory

at the other end of it. This has been transformed into various uses from apartments to a special design college and part university buildings, a massive indoor Skate park, Europe’s largest one, and an indoor market for small traders in fashion, music goods, barbers and cafe. A special designer store was also on site elsewhere and warehouse cafe /restaurant all very inventive. We spotted also a huge innovation centre hub too. Carline likes to call Eindhoven the Design city and in the middle of October they have an international conference/ festival called design week. Another event they have is the winter Glow festival where the “city of Light” is termed-given the Philips association with the city. Unlike the Waterford North Quays plan the strength of Eindhoven is that the council bought the old factories from Phillips and was able to create its own template on a gradual

basis over a decade. We in Ireland suffered too hard from the financial crash and bail out, with the Irish Government reluctant to allow councils borrow money to create such initiatives. However, Limerick has been allowed get funding form the EU European Investment Bank for its plans. We found the Dutch tone very positive and she advised it is always better to look forward than back, we realised all the negative news about Waterford after the Glass closure in Kilbarry. In Eindhoven Phillips relocated to Amsterdam in an unpopular move but its property left the city with an opportunity. Over a period Philips had moved some electrical manufacturing overseas and now focus more on design and research. The University of Eindhoven and training colleges were given substantial funds. Now the city has turned the corner and are near

full employment again, said Carline. We found the city vibrant lots of nice places to eat, do shopping or even have a drink. The O Shea’s Irish bar, in the markets area won the best prize for dining for all Irish pubs in Europe this year. The city centre is busy and has great train connections to South Holland, Rotterdam and Amsterdam. It is possible for residents to commute to those cities for work. Culturally they have good galleries, music schools and orchestras too. With a city population of 220,000 it does have critical mass and as a result many larger chain stores come here although there is a threat to retail with online shopping. The main things they see on this point is to have value shopping. They also promote the liveliness of the city for young people at weekends. They have a great “Downtown gourmet food market” too

where you can eat from various stalls and restaurants and bring the food to your table. It is open two years and it’s been a rip roaring success from what we could see on a Saturday evening. They have an amazing 21 eateries and we spoke with boss Kevin, who said food is all original and they provide the cutlery, napkins and drinks with two central bars in a very well run operation. Many go there after shopping on Saturday afternoon. They also have 6 food trucks there. It is very much informal dining as the people are informal too. The style is like tapas and you can have lots of dishes at reasonable prices We tried some Asian food from Vietnam, but you have variety from hamburgers to fish, even sushi and a variety of ethnic food, hard to find a proper Dutch restaurant with local food, Indonesian food is popular too, a former colony. For beer lovers, we found a micro-brewery, called Stads brewery and had a beer called 40 watts which was very tasty, working in an old building off the local river that flows speedily through the city too and like in Ireland they are making some gin also. The cafe there is called 100 watt. The other local brew is Van Moll, available at the Gourmet market too. Some of the beers had funny names like symphony of demons and a circus citrus beer in the Stads brewery. Nearby Belgium is famous for beer so quality is good. We were also told to visit the sky bar for a view of the city but missed it however. It was pleasant to walk along nearby canals and see houseboats earlier in the day close to the shopping area, we dined at a warehouse restaurant called the Kazerne, not cheap but good quality fish- turbot and spinach. They also do rooms too in a boutique hotel. You can see the stars from your room. If you feel you want a late night snack try the “Kapsalon”, which is a spicy kebab with cheese and is part Indonesian we were told. Another local dish is the “Stampot”,a hot veg soup like colcannon, herrings on bread is popular too.

We did not stay there but we were also recommended the Art hotel, 80-100 euro but you can get an IBIS for 70 euro so good value, compared to Ireland or Amsterdam. You can use it as a base to visit Amsterdam, just an hour away by fast train. The main city is over 100 years old and is very much an industrial one. Philips go back 125 years,overall. It suffered heavy allied bombing in the war in 1944, was rebuilt and is thus very modern, the older fine churches survived. In terms of culture see the great art gallery of Eindhoven, the Van Abbe museum a local business man Van Abbe gave his art to the city and included Picasso, Kandinsky and Matisse, plus many of Snijder radical art from the sixties. Some had nudity and profane language from the permissive society era of the 60s and 70s. downstairs were some good war stuff from the Soviet and Nazi eras, with propaganda art. It is 75 years since Eindhoven city was liberated from the Nazis, but even after liberation the allies bombed the Philips factory in error many hundreds died in that December 1944 attack when the city was freed in October. Today Eindhoven is a good place to live, where housing costs and rents are very reasonable. People are re-locating from other more expensive places. Tech firms are moving here like American firm Shapeway.com, who made 3d printers. They call the place the Brain Port too. Techies come here to set up business from different parts of the world. It all makes for a happy package for residents, good place for Irish students to do Erasmus.

GETTING THERE Easy to get there from Ireland with Ryanair having regular cheap flights from Dublin.20 mins by bus from the train station and in ten mins you can get through airport security, a little like Cork Airport. 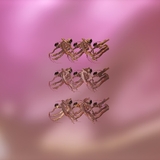