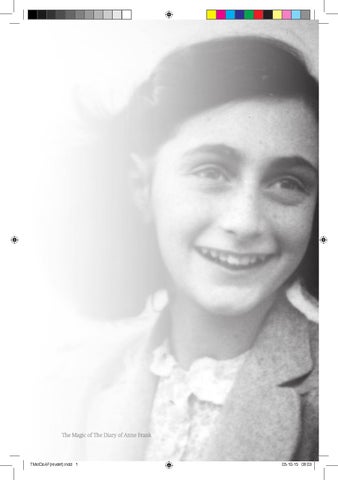 This publication accompanies the documentary The Magic of the Diary of Anne Frank, made by Bernard Krikke and broadcasted by Dutch television broadcaster VARA.

All rights reserved. No part of this publication may be reproduced in any manner without permission. Every effort has been made to contact copyright holders and to ensure that all the information presented is correct. If proper copyright acknowledgment has not been made, or for clarifications and corrections, please contact the publishers and we will correct the information in future reprintings, if any.

Magic of the diary of Anne Frank

Dan Brown • Author ‘If I were in Anne’s situation, would I be as optimistic, graceful, hopeful and compassionate?’

Whoopi Goldberg • Actress/author ‘Do I have the heroics in my that this little girl had in her?’

Rudi Oppenheimer • Bergen Belsen survivor ‘When my mom died in Bergen Belsen we didn’t dwell on it long. It meant more time to search for food’

‘Anne Frank belongs to all of us, she is ours and we are hers’

Nair Mueda • One of the Mothers of the Plaza de Mayo ‘My daughter always thought she would survive, just like Anne Frank thought’

Wesley Clark • General United States Army (ret.) ‘The lessons I learned in Kosovo are the same lessons Anne Frank had taught me’

Jeroen Krabbé • Actor/director/painter ‘The only contact Anne had with the outside world, was sniffing the fresh air on Miep’s coat’

Yvonne Simmons • Former Executive Director Anne Frank Center NY ‘At 9/11 everybody was stripped of their ethnicity and status in life; we were all one’

Christopher Mikkelsen • Founder Refugees United ‘What would you write if you were a Somali refugee: what would your modern day version of Anne Frank be?’

Ronald Leopold • Executive Director Anne Frank House ‘I’m very impressed by the way the younger generation of Germans are facing their past, for which they are not responsible’

Douglas Patzi • Guide Anne Frank Center Argentina ‘When I think I’m doing something wrong, I read the diary and try to change my opinion’

Gloria Estefan • Singer ‘Anne Frank is one of the most important survivors in history: her story survived and her message survived’

The history of the diary

‘The world needs the diary of Anne Frank now more than ever’ (Dan Brown) The Magic of The Diary of Anne Frank. It has been an honor to produce this documentary. It all began when we were making an earlier documentary, The Magic of Mandela. We discovered that Anne Frank’s writing had given strength to that heroic politician and fighter throughout his own lifelong struggle to win freedom for his nation. Nelson Mandela had a copy of the diary during his sixteen-year imprisonment on Robben Island. After reading each page, he would tear it out and pass it on to another prisoner. A great man who triumphed over oppression and inspired billions – and even he was inspired by the diary of this little Jewish girl! Taking that story as the start of our research, Marja van der Kooi and I embarked on a global undertaking for this new production. We

wanted to find out why The Diary Of Anne Frank is still so important to so many people. And we did discover all kinds of ‘magic’ in its pages. Over 20 million copies of the diary have been sold worldwide, in more than 70 languages. Why have the thoughts and ideas of a teenage girl, written in secret, written in silence over 70 years ago, continued to have such an amazing impact today? Many answers to this intriguing question emerged during our filming. We learned Anne’s magic draws politicians, world leaders, pop stars and actors to visit the Annex of the Anne Frank House in Amsterdam, even on the shortest trip to The Netherlands. Dutch VARA-host, Astrid Joosten, editor, Simonka de Jong, travelled with me all over the world to explore the diary’s unique appeal in interviews. We visited singer Gloria Estefan, herself a refugee from Cuba. American actress Whoopi Goldberg told us she dedicated a play to Anne, and explained how she demonstrates to theatre audiences how difficult it is to be quiet, completely silent, even for a minute. Onetime US General, Wesley Clark, discussed similarities between Anne’s diary and his own experiences as a NATO Commander. ‘No more Anne Franks,’ was his message in the Pentagon. Former-director of the Anne Frank Center in New York, Yvonne Simons, related the diary to her memories of being caught up in the 9/11 disaster. Actor Jeffrey Wright compared his visit to the Annex House to a pilgrimage. Dutch actor Jeroen Krabbé went even further: he stayed overnight

in the Annex House with fellow actors so they could ‘experience the silence of the place’ themselves. It was ‘an everlasting experience’, Krabbé recalls.

In addition to filming famous contributors, we travelled across the world – to New York, London, Bergen Belsen in Germany and Buenos Aires in Argentina – seeking stories of other lives affected by Anne Frank. Some stories are sad – like the Mothers of the Plaza de Mayo whose children were ‘disappeared’ by an Argentinian dictatorship – but all of them increased our understanding of the diary’s significance. It’s been seven decades since Anne Frank died in the concentration camp, Bergen Belsen. But her words and her story are still alive after all that time - maybe even more powerfully now than ever. The Anne Frank Fonds in Basel has backed a new play, especially written for young audiences all over the world, based on her life. It has been attracting a lot of young people in Amsterdam, proving that the magic of the diary is enduring and engaging. A story never to be forgotten. Sadly, millions of children and their families are being damaged right now by wars, by prejudice, by hatred and religious persecution. Telling Anne’s story is increasingly relevant and important to our hopes of creating a better future for people everywhere, young and old. This is what making our documentary has taught us. As Jeffrey Wright told us: ‘My children can take strength from her story, and survive and flourish’. I hope you will gain as much inspiration from the interviews with the people in this book as we have done.

Bernard Krikke Executive Producer, ‘The Magic of the Diary of Anne Frank’ October 2015