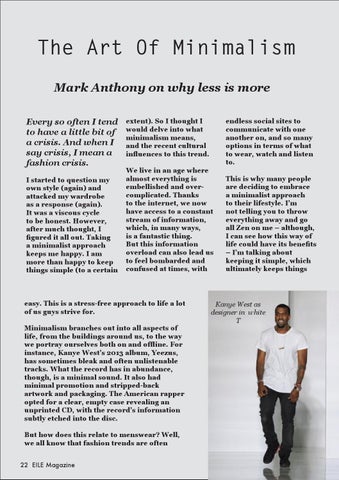 The Art Of Minimalism Mark Anthony on why less is more Every so often I tend to have a little bit of a crisis. And when I say crisis, I mean a fashion crisis. I started to question my own style (again) and attacked my wardrobe as a response (again). It was a viscous cycle to be honest. However, after much thought, I figured it all out. Taking a minimalist approach keeps me happy. I am more than happy to keep things simple (to a certain

extent). So I thought I would delve into what minimalism means, and the recent cultural influences to this trend. We live in an age where almost everything is embellished and overcomplicated. Thanks to the internet, we now have access to a constant stream of information, which, in many ways, is a fantastic thing. But this information overload can also lead us to feel bombarded and confused at times, with

easy. This is a stress-free approach to life a lot of us guys strive for. Minimalism branches out into all aspects of life, from the buildings around us, to the way we portray ourselves both on and offline. For instance, Kanye West’s 2013 album, Yeezus, has sometimes bleak and often unlistenable tracks. What the record has in abundance, though, is a minimal sound. It also had minimal promotion and stripped-back artwork and packaging. The American rapper opted for a clear, empty case revealing an unprinted CD, with the record’s information subtly etched into the disc. But how does this relate to menswear? Well, we all know that fashion trends are often 22 EILE Magazine

endless social sites to communicate with one another on, and so many options in terms of what to wear, watch and listen to. This is why many people are deciding to embrace a minimalist approach to their lifestyle. I’m not telling you to throw everything away and go all Zen on me – although, I can see how this way of life could have its benefits – I’m talking about keeping it simple, which ultimately keeps things

The LGBT Magazine, for those who want another view. Includes interviews with director Pamela Drynan of RTÉ documentary, 'Where I Am'; musici...

The LGBT Magazine, for those who want another view. Includes interviews with director Pamela Drynan of RTÉ documentary, 'Where I Am'; musici...