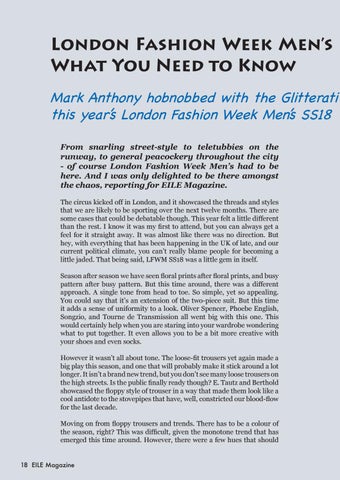 London Fashion Week Men’s S What You Need to Know Mark Anthony hobnobbed with the Glitterati this year’s London Fashion Week Men’s SS18 From snarling street-style to teletubbies on the runway, to general peacockery throughout the city - of course London Fashion Week Men’s had to be here. And I was only delighted to be there amongst the chaos, reporting for EILE Magazine. The circus kicked off in London, and it showcased the threads and styles that we are likely to be sporting over the next twelve months. There are some cases that could be debatable though. This year felt a little different than the rest. I know it was my first to attend, but you can always get a feel for it straight away. It was almost like there was no direction. But hey, with everything that has been happening in the UK of late, and our current political climate, you can’t really blame people for becoming a little jaded. That being said, LFWM SS18 was a little gem in itself. Season after season we have seen floral prints after floral prints, and busy pattern after busy pattern. But this time around, there was a different approach. A single tone from head to toe. So simple, yet so appealing. You could say that it’s an extension of the two-piece suit. But this time it adds a sense of uniformity to a look. Oliver Spencer, Phoebe English, Songzio, and Tourne de Transmission all went big with this one. This would certainly help when you are staring into your wardrobe wondering what to put together. It even allows you to be a bit more creative with your shoes and even socks. However it wasn’t all about tone. The loose-fit trousers yet again made a big play this season, and one that will probably make it stick around a lot longer. It isn’t a brand new trend, but you don’t see many loose trousers on the high streets. Is the public finally ready though? E. Tautz and Berthold showcased the floppy style of trouser in a way that made them look like a cool antidote to the stovepipes that have, well, constricted our blood-flow for the last decade. Moving on from floppy trousers and trends. There has to be a colour of the season, right? This was difficult, given the monotone trend that has emerged this time around. However, there were a few hues that should 18 EILE Magazine