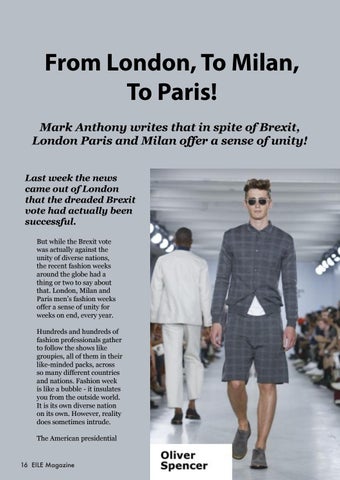 From London, To Milan, To Paris! Mark Anthony writes that in spite of Brexit, London Paris and Milan offer a sense of unity! Last week the news came out of London that the dreaded Brexit vote had actually been successful. But while the Brexit vote was actually against the unity of diverse nations, the recent fashion weeks around the globe had a thing or two to say about that. London, Milan and Paris menâ&#x20AC;&#x2122;s fashion weeks offer a sense of unity for weeks on end, every year. Hundreds and hundreds of fashion professionals gather to follow the shows like groupies, all of them in their like-minded packs, across so many different countries and nations. Fashion week is like a bubble - it insulates you from the outside world. It is its own diverse nation on its own. However, reality does sometimes intrude. The American presidential