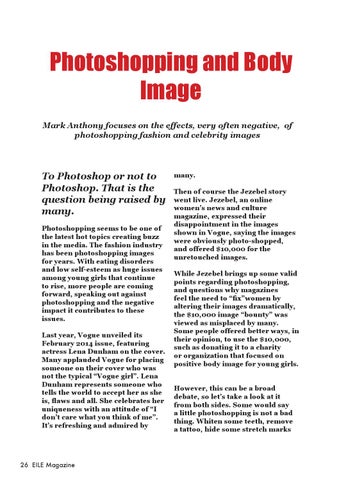 To Photoshop or not to Photoshop. That is the question being raised by many. Photoshopping seems to be one of the latest hot topics creating buzz in the media. The fashion industry has been photoshopping images for years. With eating disorders and low self-esteem as huge issues among young girls that continue to rise, more people are coming forward, speaking out against photoshopping and the negative impact it contributes to these issues. Last year, Vogue unveiled its February 2014 issue, featuring actress Lena Dunham on the cover. Many applauded Vogue for placing someone on their cover who was not the typical “Vogue girl”. Lena Dunham represents someone who tells the world to accept her as she is, flaws and all. She celebrates her uniqueness with an attitude of “I don’t care what you think of me”. It’s refreshing and admired by

many. Then of course the Jezebel story went live. Jezebel, an online women’s news and culture magazine, expressed their disappointment in the images shown in Vogue, saying the images were obviously photo-shopped, and offered $10,000 for the unretouched images. While Jezebel brings up some valid points regarding photoshopping, and questions why magazines feel the need to “fix”women by altering their images dramatically, the $10,000 image “bounty” was viewed as misplaced by many. Some people offered better ways, in their opinion, to use the $10,000, such as donating it to a charity or organization that focused on positive body image for young girls. However, this can be a broad debate, so let’s take a look at it from both sides. Some would say a little photoshopping is not a bad thing. Whiten some teeth, remove a tattoo, hide some stretch marks