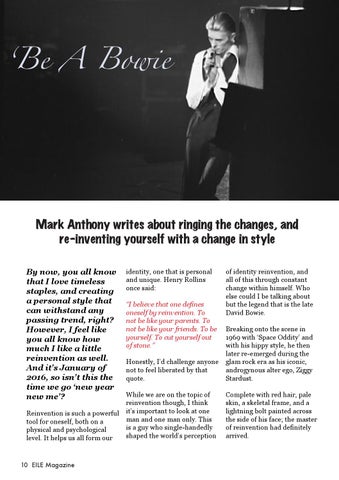 Mark Anthony writes about ringing the changes, and re-inventing yourself with a change in style By now, you all know that I love timeless staples, and creating a personal style that can withstand any passing trend, right? However, I feel like you all know how much I like a little reinvention as well. And it’s January of 2016, so isn’t this the time we go ‘new year new me’? Reinvention is such a powerful tool for oneself, both on a physical and psychological level. It helps us all form our

of identity reinvention, and all of this through constant change within himself. Who else could I be talking about but the legend that is the late David Bowie.

Honestly, I’d challenge anyone not to feel liberated by that quote.

Breaking onto the scene in 1969 with ‘Space Oddity’ and with his hippy style, he then later re-emerged during the glam rock era as his iconic, androgynous alter ego, Ziggy Stardust.

While we are on the topic of reinvention though, I think it’s important to look at one man and one man only. This is a guy who single-handedly shaped the world’s perception

Complete with red hair, pale skin, a skeletal frame, and a lightning bolt painted across the side of his face; the master of reinvention had definitely arrived.

EILE Magazine, the LGBT magazine for those who want another view. This month features singer Josh Stevens, Rochford on heart health, Mark An...

EILE Magazine, the LGBT magazine for those who want another view. This month features singer Josh Stevens, Rochford on heart health, Mark An...