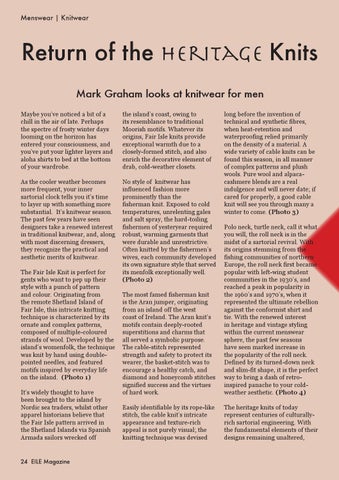 Return of the Heritage Knits Mark Graham looks at knitwear for men Maybe you’ve noticed a bit of a chill in the air of late. Perhaps the spectre of frosty winter days looming on the horizon has entered your consciousness, and you’ve put your lighter layers and aloha shirts to bed at the bottom of your wardrobe.

the island’s coast, owing to its resemblance to traditional Moorish motifs. Whatever its origins, Fair Isle knits provide exceptional warmth due to a closely-formed stitch, and also enrich the decorative element of drab, cold-weather closets.

As the cooler weather becomes more frequent, your inner sartorial clock tells you it’s time to layer up with something more substantial. It’s knitwear season. The past few years have seen designers take a renewed interest in traditional knitwear, and, along with most discerning dressers, they recognize the practical and aesthetic merits of knitwear.

No style of knitwear has influenced fashion more prominently than the fisherman knit. Exposed to cold temperatures, unrelenting gales and salt spray, the hard-toiling fishermen of yesteryear required robust, warming garments that were durable and unrestrictive. Often knitted by the fishermen’s wives, each community developed its own signature style that served its menfolk exceptionally well. (Photo 2)

The Fair Isle Knit is perfect for gents who want to pep up their style with a punch of pattern and colour. Originating from the remote Shetland Island of Fair Isle, this intricate knitting technique is characterized by its ornate and complex patterns, composed of multiple-coloured strands of wool. Developed by the island’s womenfolk, the technique was knit by hand using doublepointed needles, and featured motifs inspired by everyday life on the island. (Photo 1) It’s widely thought to have been brought to the island by Nordic sea traders, whilst other apparel historians believe that the Fair Isle pattern arrived in the Shetland Islands via Spanish Armada sailors wrecked off

long before the invention of technical and synthetic fibres, when heat-retention and waterproofing relied primarily on the density of a material. A wide variety of cable knits can be found this season, in all manner of complex patterns and plush wools. Pure wool and alpacacashmere blends are a real indulgence and will never date; if cared for properly, a good cable knit will see you through many a winter to come. (Photo 3)

The most famed fisherman knit is the Aran jumper, originating from an island off the west coast of Ireland. The Aran knit’s motifs contain deeply-rooted superstitions and charms that all served a symbolic purpose. The cable-stitch represented strength and safety to protect its wearer, the basket-stitch was to encourage a healthy catch, and diamond and honeycomb stitches signified success and the virtues of hard work.

Polo neck, turtle neck, call it what you will, the roll neck is in the midst of a sartorial revival. With its origins stemming from the fishing communities of northern Europe, the roll neck first became popular with left-wing student communities in the 1930’s, and reached a peak in popularity in the 1960’s and 1970’s, when it represented the ultimate rebellion against the conformist shirt and tie. With the renewed interest in heritage and vintage styling within the current menswear sphere, the past few seasons have seen marked increase in the popularity of the roll neck. Defined by its turned-down neck and slim-fit shape, it is the perfect way to bring a dash of retroinspired panache to your coldweather aesthetic. (Photo 4)

Easily identifiable by its rope-like stitch, the cable knit’s intricate appearance and texture-rich appeal is not purely visual; the knitting technique was devised

The heritage knits of today represent centuries of culturallyrich sartorial engineering. With the fundamental elements of their designs remaining unaltered,