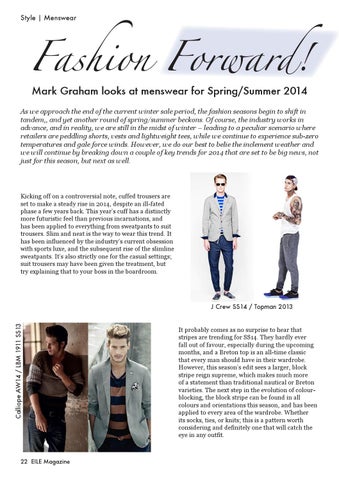 Mark Graham looks at menswear for Spring/Summer 2014 As we approach the end of the current winter sale period, the fashion seasons begin to shift in tandem,, and yet another round of spring/summer beckons. Of course, the industry works in advance, and in reality, we are still in the midst of winter – leading to a peculiar scenario where retailers are peddling shorts, vests and lightweight tees, while we continue to experience sub-zero temperatures and gale force winds. However, we do our best to belie the inclement weather and we will continue by breaking down a couple of key trends for 2014 that are set to be big news, not just for this season, but next as well.

Kicking off on a controversial note, cuffed trousers are set to make a steady rise in 2014, despite an ill-fated phase a few years back. This year’s cuff has a distinctly more futuristic feel than previous incarnations, and has been applied to everything from sweatpants to suit trousers. Slim and neat is the way to wear this trend. It has been influenced by the industry’s current obsession with sports luxe, and the subsequent rise of the slimline sweatpants. It’s also strictly one for the casual settings; suit trousers may have been given the treatment, but try explaining that to your boss in the boardroom.

It probably comes as no surprise to hear that stripes are trending for SS14. They hardly ever fall out of favour, especially during the upcoming months, and a Breton top is an all-time classic that every man should have in their wardrobe. However, this season’s edit sees a larger, block stripe reign supreme, which makes much more of a statement than traditional nautical or Breton varieties. The next step in the evolution of colourblocking, the block stripe can be found in all colours and orientations this season, and has been applied to every area of the wardrobe. Whether its socks, ties, or knits; this is a pattern worth considering and definitely one that will catch the eye in any outfit.

The LGBT magazine, for those who want another view. Includes interviews with singers Sarah Sylvia, Shane McLaughlin and Anthony Starble; art...

The LGBT magazine, for those who want another view. Includes interviews with singers Sarah Sylvia, Shane McLaughlin and Anthony Starble; art...