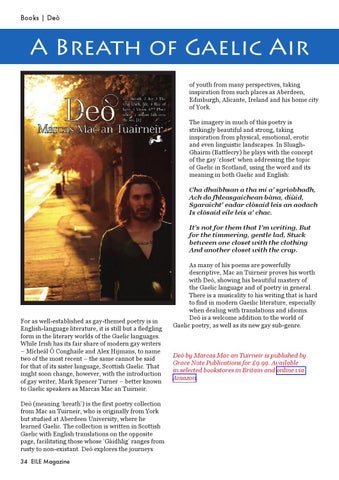 A Breath of Gaelic Air of youth from many perspectives, taking inspiration from such places as Aberdeen, Edinburgh, Alicante, Ireland and his home city of York. The imagery in much of this poetry is strikingly beautiful and strong, taking inspiration from physical, emotional, erotic and even linguistic landscapes. In SluaghGhairm (Battlecry) he plays with the concept of the gay ‘closet’ when addressing the topic of Gaelic in Scotland, using the word and its meaning in both Gaelic and English: Cha dhaibhsan a tha mi a’ sgrìobhadh, Ach do fhleasgaichean bàna, diùid, Sgaraicht’ eadar clòsaid leis an aodach Is clòsaid eile leis a’ chac. It’s not for them that I’m writing, But for the timmering, gentle lad, Stuck between one closet with the clothing And another closet with the crap.

For as well-established as gay-themed poetry is in English-language literature, it is still but a fledgling form in the literary worlds of the Gaelic languages. While Irish has its fair share of modern gay writers – Mícheál Ó Conghaile and Alex Hijmans, to name two of the most recent – the same cannot be said for that of its sister language, Scottish Gaelic. That might soon change, however, with the introduction of gay writer, Mark Spencer Turner – better known to Gaelic speakers as Marcas Mac an Tuirneir. Deò (meaning ‘breath’) is the first poetry collection from Mac an Tuirneir, who is originally from York but studied at Aberdeen University, where he learned Gaelic. The collection is written in Scottish Gaelic with English translations on the opposite page, facilitating those whose ‘Gàidhlig’ ranges from rusty to non-existant. Deò explores the journeys 34 EILE Magazine

As many of his poems are powerfully descriptive, Mac an Tuirneir proves his worth with Deò, showing his beautiful mastery of the Gaelic language and of poetry in general. There is a musicality to his writing that is hard to find in modern Gaeilic literature, especially when dealing with translations and idioms. Deò is a welcome addition to the world of Gaelic poetry, as well as its new gay sub-genre.

Deò by Marcas Mac an Tuirneir is published by Grace Note Publications for £9.99. Available in selected bookstores in Britain and online via Amazon.

The LGBT Magazine, for those who want another view. Features Mr Gay Ireland & Mr Gay Northern Ireland; The Importance of Being Earnest as an opera; Belfast's Outburst festival and much more. 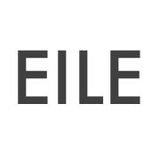