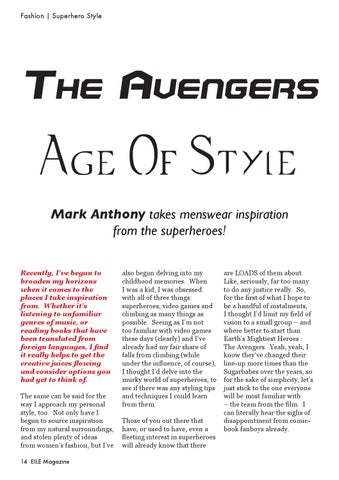 The Avengers Age Of Style Mark Anthony takes menswear inspiration from the superheroes! Recently, I’ve begun to broaden my horizons when it comes to the places I take inspiration from. Whether it’s listening to unfamiliar genres of music, or reading books that have been translated from foreign languages, I find it really helps to get the creative juices flowing and consider options you had yet to think of. The same can be said for the way I approach my personal style, too. Not only have I begun to source inspiration from my natural surroundings, and stolen plenty of ideas from women’s fashion, but I’ve 14 EILE Magazine

also begun delving into my childhood memories. When I was a kid, I was obsessed with all of three things: superheroes, video games and climbing as many things as possible. Seeing as I’m not too familiar with video games these days (clearly) and I’ve already had my fair share of falls from climbing (while under the influence, of course), I thought I’d delve into the murky world of superheroes, to see if there was any styling tips and techniques I could learn from them. Those of you out there that have, or used to have, even a fleeting interest in superheroes will already know that there

are LOADS of them about. Like, seriously, far too many to do any justice really. So, for the first of what I hope to be a handful of instalments, I thought I’d limit my field of vision to a small group – and where better to start than Earth’s Mightiest Heroes : The Avengers. Yeah, yeah, I know they’ve changed their line-up more times than the Sugarbabes over the years, so for the sake of simplicity, let’s just stick to the one everyone will be most familiar with – the team from the film. I can literally hear the sighs of disappointment from comicbook fanboys already.