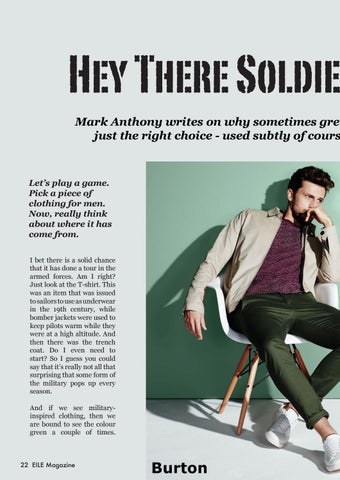 Letâ&#x20AC;&#x2122;s play a game. Pick a piece of clothing for men. Now, really think about where it has come from. I bet there is a solid chance that it has done a tour in the armed forces. Am I right? Just look at the T-shirt. This was an item that was issued to sailors to use as underwear in the 19th century, while bomber jackets were used to keep pilots warm while they were at a high altitude. And then there was the trench coat. Do I even need to start? So I guess you could say that itâ&#x20AC;&#x2122;s really not all that surprising that some form of the military pops up every season. And if we see militaryinspired clothing, then we are bound to see the colour green a couple of times.

The LGBT Magazine for those who want another view

The LGBT Magazine for those who want another view