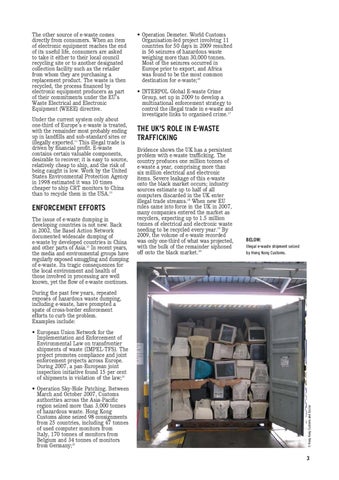 The other source of e-waste comes directly from consumers. When an item of electronic equipment reaches the end of its useful life, consumers are asked to take it either to their local council recycling site or to another designated collection facility such as the retailer from whom they are purchasing a replacement product. The waste is then recycled, the process financed by electronic equipment producers as part of their commitments under the EU's Waste Electrical and Electronic Equipment (WEEE) directive. Under the current system only about one-third of Europe’s e-waste is treated, with the remainder most probably ending up in landfills and sub-standard sites or illegally exported.11 This illegal trade is driven by financial profit. E-waste contains certain valuable components, desirable to recover; it is easy to source, relatively cheap to ship, and the risk of being caught is low. Work by the United States Environmental Protection Agency in 1998 estimated it was 10 times cheaper to ship CRT monitors to China than to recycle them in the USA.12

ENFORCEMENT EFFORTS The issue of e-waste dumping in developing countries is not new. Back in 2002, the Basel Action Network documented widescale dumping of e-waste by developed countries in China and other parts of Asia.13 In recent years, the media and environmental groups have regularly exposed smuggling and dumping of e-waste. Its tragic consequences for the local environment and health of those involved in processing are well known, yet the flow of e-waste continues.

• Operation Demeter. World Customs Organisation-led project involving 11 countries for 50 days in 2009 resulted in 56 seizures of hazardous waste weighing more than 30,000 tonnes. Most of the seizures occurred in Europe prior to export, and Africa was found to be the most common destination for e-waste;16 • INTERPOL Global E-waste Crime Group, set up in 2009 to develop a multinational enforcement strategy to control the illegal trade in e-waste and investigate links to organised crime.17

THE UK'S ROLE IN E-WASTE TRAFFICKING Evidence shows the UK has a persistent problem with e-waste trafficking. The country produces one million tonnes of e-waste a year, comprising more than six million electrical and electronic items. Severe leakage of this e-waste onto the black market occurs; industry sources estimate up to half of all computers discarded in the UK enter illegal trade streams.18 When new EU rules came into force in the UK in 2007, many companies entered the market as recyclers, expecting up to 1.5 million tonnes of electrical and electronic waste needing to be recycled every year.19 By 2009, the volume of e-waste recorded was only one-third of what was projected, with the bulk of the remainder siphoned off onto the black market.20

During the past few years, repeated exposés of hazardous waste dumping, including e-waste, have prompted a spate of cross-border enforcement efforts to curb the problem. Examples include:

• European Union Network for the Implementation and Enforcement of Environmental Law on transfrontier shipments of waste (IMPEL-TFS). The project promotes compliance and joint enforcement projects across Europe. During 2007, a pan-European joint inspection initiative found 15 per cent of shipments in violation of the law;14 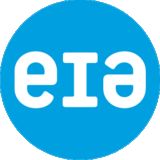 Report into the Illegal E-Waste Trade

Report into the Illegal E-Waste Trade