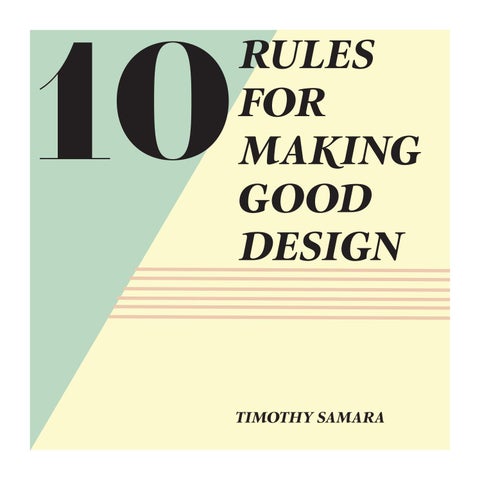 is also commentary, opinion, a point of view, and social responsibility. To design sign

is much more than simply to assemble, to order, or even to edit; it is to add

value and meaning, to

illuminate, to simplify, to clarify, to modify, to dignify, to dramatize, to persuade, and perhaps even to amuse. Design is both a verb and a

noun. It is the

beginning as well as the end, the process and the

Have A Concept. If there’s no message, no story,no idea,no narrative, or no useful experience to be had, it’s not graphic design. It doesn’t matter how amazing the thing is to look at; without a clear message, it’s an empty, although beautiful, shell.That’s about as complicated as this rule can get. Let’s move on.

Choose typefaces for specific purposes. In doing that you’ll need to define what the purposes are, and you’re likely to find that there are only two or three purposes for text in a project. Because a change in type family usually signals a change in meaning or function—

restrain yourself! A single type family with a variety of weights and italics should be enough by itself; adding a second is nice for texture, but don’t overdo it. Too many typefaces are distracting and self-conscious and might confuse or tire the viewer.

3 Negative space is magical—create it, don’t just fill it up.

It’s often said that negative space—sometimes called white space (even though there might not be any white around—is more important than the stuff that’s in it. For the most part, this is true. Space calls attention to content, separates it from unrelated content around it, and gives the eyes a resting place. Negative space is just as much a space that you have to deal

with in a composition as positive shapes, whether pictures or type. When you don’t deal with it at all, negative space feels dead and disconnected from the visual material it surrounds. If the space gets filled up, the result is an oppressive presentation that no one will want to deal with. A lack of negative space overwhelms and confuses the audience, which is likely to get turned off.

Measure with your eyes: design is visual.

A thing is what it looks like— make it look the way it’s supposed to look. The eyes are funny things; they’re often fooled by visual stimuli, the notorious optical illusion. Oddly optical illusions account for ninety percent of the visual logic of composition. Horizontal lines, for example appear to drop in space and have to be adjusted upward to appear centered from top to bottom. Circular forms always look smaller than square forms that are mathematically the same height, so they must be faked a little larger that the square forms to appear the same size.

Make decisions on behalf of your audience: Are the two elements of the same size or not? Is the form touching the edge of the format or not? Are the two elements aligning or not? If you intend one element to align with another, do it by eye—don’t measure. If the viewer perceives the two items as aligning, it will assume they actually do. If you align two items by measuring and they don’t look like they do, it doesn’t matter that they are really lined up. The viewer will see two items that look like they should have aligned and will remember that some sloppy designer forgot to make sure that they did.

Make what you need, and make it the best you can—or pay someone else to do it for you. Nothing is more banal or meaningless than a commonly used instance of stock photography that shows up everywhere. Try not to rely on what already exists, even though it might be cheaper or easier. Sometimes a simpler and more meaningful solution is no further away than a couple of dots and lines, or a personalized scribble

that—while not slick, glossy and full color (and lesser in meaning for your project because it was seen last week in a shopping mall’s newspaper ad, a billboard used for cars, or a male enhancement product packaging)—might connect powerfully with the audience. Plus, you can say, quite proudly, that you did it all yourself.

Oooh…Neat! But what exactly is it? Somewhat related to Rule No. 1, this rule is about how you support the all important concept. Form carries meaning, no matter how simple or abstract, and form that’s not right for a given message will communicate messages that you don’t intend—including the message that you don’t know how to choose forms that are meaningful for your audience or that you

don’t care what’s meaningful for them. It’s all well and good to experiment with shapes and details and cool effects, but if you simply spackle them all over without considering what they mean and how they support or take away from the message, you end up with a jumbled mass of junk that no longer qualifies as design.

Don’t just grab some colors from out of the air. Know what the colors will do when you combine them and, more important, what they might mean to the audience. Color carries an abundance of psychological and emotional meaning, and this meaning can vary tremendously between cultural groups and even individuals. Color affects visual hierarchy, the legibility of type, and how people make

connections between disparate items—sometimes called color coding—so choose wisely. Never assume that a certain color, or combination of colors ids right for a particular job because of convention either. Blue for financial services, for example, is the standout color cliché of the past 50 years. Chose colors that are right, not those that are expected.

Look to history, but don’t repeat it. The design of the past has its place. It’s important and inspiring to consider how communication strategies and aesthetics have changed over time, and to understand how his or her own work fits into the continuum of thought and practice. Even more useful is the realization that somewhere along the way,another designer faced a similar problem…and solved it.

To slavishly reproduce a period style because it’s really cool—or worse, because the clients think that their “Circus Party” invitation should look like an 1846 wood-type poster—is just unacceptable. Learn from the work of others, but do your own work.

People make a weird assumption about two-dimensional visual stuff, and that is—it’s flat and lifeless! Go figure. This is why painters and designers have been working like dogs for 1,000 years to create the illusion of three-dimensional movement on a flat surface to fool the viewer into having a

moving experience! If a layout is clearly flat and fails to offer a sense of movement or spatial interaction, a state that is relatively easy to achieve, the viewers brain is likely to be uninterested enough to hang out and see what the message is. Static compositions say, “You’ve figured me out…so walk away, nothing to see here.”

10 Symmetry is the ultimate evil.

It’s true that symmetry occurs in nature just look at our bodies— but that doesn’t mean that it’s a good strategy for designing. Symmetrical visual arrangements are generally static and offer little movement (see rule No.18). Worse, symmetrical arrangements make integrating asymmetrical image material awkward, and limit a designer’s flexibility in pacing and dealing with content that

doesn’t quite fit into the symmetrical mold. Last but certainly not least: symmetry shouts very loudly that the designer is lazy and likes to let the format do the designing. The format has a center axis, and clearly everyone can see that. Why let the format tell you what to do? You tell the format who’s boss.