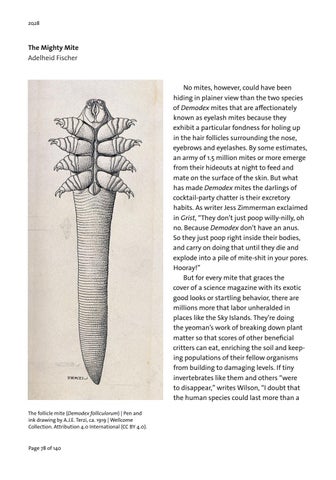 No mites, however, could have been hiding in plainer view than the two species of Demodex mites that are affectionately known as eyelash mites because they exhibit a particular fondness for holing up in the hair follicles surrounding the nose, eyebrows and eyelashes. By some estimates, an army of 1.5 million mites or more emerge from their hideouts at night to feed and mate on the surface of the skin. But what has made Demodex mites the darlings of cocktail-party chatter is their excretory habits. As writer Jess Zimmerman exclaimed in Grist, “They don’t just poop willy-nilly, oh no. Because Demodex don’t have an anus. So they just poop right inside their bodies, and carry on doing that until they die and explode into a pile of mite-shit in your pores. Hooray!” But for every mite that graces the cover of a science magazine with its exotic good looks or startling behavior, there are millions more that labor unheralded in places like the Sky Islands. They’re doing the yeoman’s work of breaking down plant matter so that scores of other beneficial critters can eat, enriching the soil and keeping populations of their fellow organisms from building to damaging levels. If tiny invertebrates like them and others “were to disappear,” writes Wilson, “I doubt that the human species could last more than a The follicle mite (Demodex folliculorum) | Pen and ink drawing by A.J.E. Terzi, ca. 1919 | Wellcome Collection. Attribution 4.0 International (CC BY 4.0).