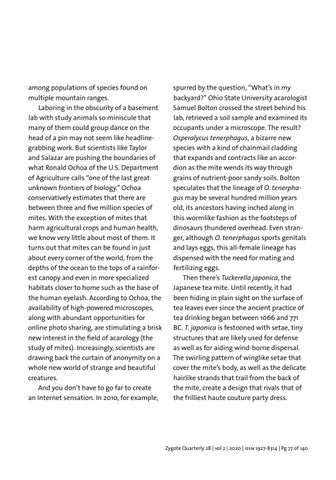 among populations of species found on multiple mountain ranges. Laboring in the obscurity of a basement lab with study animals so miniscule that many of them could group dance on the head of a pin may not seem like headlinegrabbing work. But scientists like Taylor and Salazar are pushing the boundaries of what Ronald Ochoa of the U.S. Department of Agriculture calls “one of the last great unknown frontiers of biology.” Ochoa conservatively estimates that there are between three and five million species of mites. With the exception of mites that harm agricultural crops and human health, we know very little about most of them. It turns out that mites can be found in just about every corner of the world, from the depths of the ocean to the tops of a rainforest canopy and even in more specialized habitats closer to home such as the base of the human eyelash. According to Ochoa, the availability of high-powered microscopes, along with abundant opportunities for online photo sharing, are stimulating a brisk new interest in the field of acarology (the study of mites). Increasingly, scientists are drawing back the curtain of anonymity on a whole new world of strange and beautiful creatures. And you don’t have to go far to create an Internet sensation. In 2010, for example,

spurred by the question, “What’s in my backyard?” Ohio State University acarologist Samuel Bolton crossed the street behind his lab, retrieved a soil sample and examined its occupants under a microscope. The result? Osperalycus tenerphagus, a bizarre new species with a kind of chainmail cladding that expands and contracts like an accordion as the mite wends its way through grains of nutrient-poor sandy soils. Bolton speculates that the lineage of O. tenerphagus may be several hundred million years old, its ancestors having inched along in this wormlike fashion as the footsteps of dinosaurs thundered overhead. Even stranger, although O. tenerphagus sports genitals and lays eggs, this all-female lineage has dispensed with the need for mating and fertilizing eggs. Then there’s Tuckerella japonica, the Japanese tea mite. Until recently, it had been hiding in plain sight on the surface of tea leaves ever since the ancient practice of tea drinking began between 1066 and 771 BC. T. japonica is festooned with setae, tiny structures that are likely used for defense as well as for aiding wind-borne dispersal. The swirling pattern of winglike setae that cover the mite’s body, as well as the delicate hairlike strands that trail from the back of the mite, create a design that rivals that of the frilliest haute couture party dress.