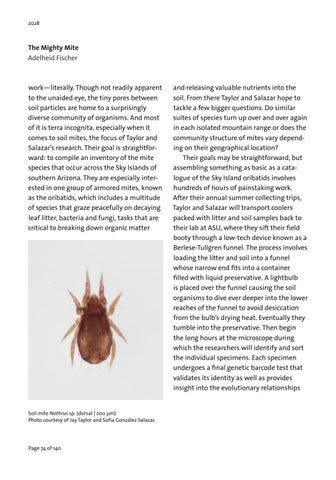 work—literally. Though not readily apparent to the unaided eye, the tiny pores between soil particles are home to a surprisingly diverse community of organisms. And most of it is terra incognita, especially when it comes to soil mites, the focus of Taylor and Salazar’s research. Their goal is straightforward: to compile an inventory of the mite species that occur across the Sky Islands of southern Arizona. They are especially interested in one group of armored mites, known as the oribatids, which includes a multitude of species that graze peacefully on decaying leaf litter, bacteria and fungi, tasks that are critical to breaking down organic matter

and releasing valuable nutrients into the soil. From there Taylor and Salazar hope to tackle a few bigger questions. Do similar suites of species turn up over and over again in each isolated mountain range or does the community structure of mites vary depending on their geographical location? Their goals may be straightforward, but assembling something as basic as a catalogue of the Sky Island oribatids involves hundreds of hours of painstaking work. After their annual summer collecting trips, Taylor and Salazar will transport coolers packed with litter and soil samples back to their lab at ASU, where they sift their field booty through a low-tech device known as a Berlese-Tullgren funnel. The process involves loading the litter and soil into a funnel whose narrow end fits into a container filled with liquid preservative. A lightbulb is placed over the funnel causing the soil organisms to dive ever deeper into the lower reaches of the funnel to avoid desiccation from the bulb’s drying heat. Eventually they tumble into the preservative. Then begin the long hours at the microscope during which the researchers will identify and sort the individual specimens. Each specimen undergoes a final genetic barcode test that validates its identity as well as provides insight into the evolutionary relationships