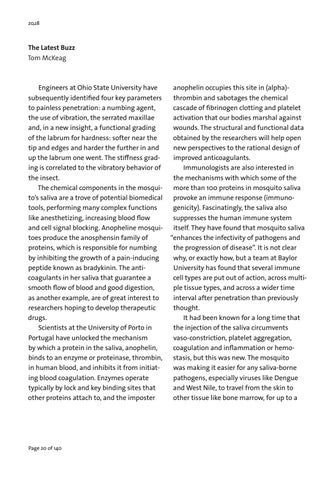 Engineers at Ohio State University have subsequently identified four key parameters to painless penetration: a numbing agent, the use of vibration, the serrated maxillae and, in a new insight, a functional grading of the labrum for hardness: softer near the tip and edges and harder the further in and up the labrum one went. The stiffness grading is correlated to the vibratory behavior of the insect. The chemical components in the mosquitoâ&#x20AC;&#x2122;s saliva are a trove of potential biomedical tools, performing many complex functions like anesthetizing, increasing blood flow and cell signal blocking. Anopheline mosquitoes produce the anosphensin family of proteins, which is responsible for numbing by inhibiting the growth of a pain-inducing peptide known as bradykinin. The anticoagulants in her saliva that guarantee a smooth flow of blood and good digestion, as another example, are of great interest to researchers hoping to develop therapeutic drugs. Scientists at the University of Porto in Portugal have unlocked the mechanism by which a protein in the saliva, anophelin, binds to an enzyme or proteinase, thrombin, in human blood, and inhibits it from initiating blood coagulation. Enzymes operate typically by lock and key binding sites that other proteins attach to, and the imposter

anophelin occupies this site in (alpha)thrombin and sabotages the chemical cascade of fibrinogen clotting and platelet activation that our bodies marshal against wounds. The structural and functional data obtained by the researchers will help open new perspectives to the rational design of improved anticoagulants. Immunologists are also interested in the mechanisms with which some of the more than 100 proteins in mosquito saliva provoke an immune response (immunogenicity). Fascinatingly, the saliva also suppresses the human immune system itself. They have found that mosquito saliva â&#x20AC;&#x153;enhances the infectivity of pathogens and the progression of diseaseâ&#x20AC;?. It is not clear why, or exactly how, but a team at Baylor University has found that several immune cell types are put out of action, across multiple tissue types, and across a wider time interval after penetration than previously thought. It had been known for a long time that the injection of the saliva circumvents vaso-constriction, platelet aggregation, coagulation and inflammation or hemostasis, but this was new. The mosquito was making it easier for any saliva-borne pathogens, especially viruses like Dengue and West Nile, to travel from the skin to other tissue like bone marrow, for up to a