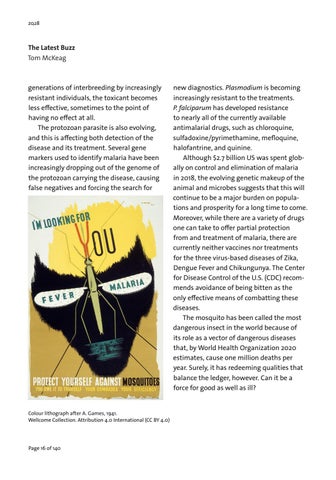 generations of interbreeding by increasingly resistant individuals, the toxicant becomes less effective, sometimes to the point of having no effect at all. The protozoan parasite is also evolving, and this is affecting both detection of the disease and its treatment. Several gene markers used to identify malaria have been increasingly dropping out of the genome of the protozoan carrying the disease, causing false negatives and forcing the search for

new diagnostics. Plasmodium is becoming increasingly resistant to the treatments. P. falciparum has developed resistance to nearly all of the currently available antimalarial drugs, such as chloroquine, sulfadoxine/pyrimethamine, mefloquine, halofantrine, and quinine. Although $2.7 billion US was spent globally on control and elimination of malaria in 2018, the evolving genetic makeup of the animal and microbes suggests that this will continue to be a major burden on populations and prosperity for a long time to come. Moreover, while there are a variety of drugs one can take to offer partial protection from and treatment of malaria, there are currently neither vaccines nor treatments for the three virus-based diseases of Zika, Dengue Fever and Chikungunya. The Center for Disease Control of the U.S. (CDC) recommends avoidance of being bitten as the only effective means of combatting these diseases. The mosquito has been called the most dangerous insect in the world because of its role as a vector of dangerous diseases that, by World Health Organization 2020 estimates, cause one million deaths per year. Surely, it has redeeming qualities that balance the ledger, however. Can it be a force for good as well as ill?