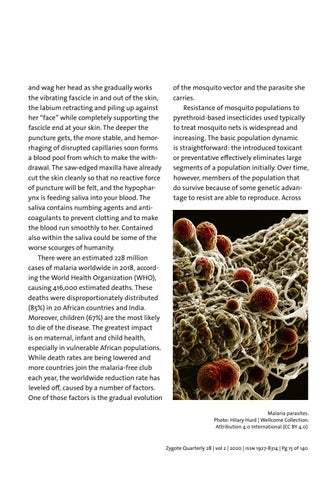 and wag her head as she gradually works the vibrating fascicle in and out of the skin, the labium retracting and piling up against her â&#x20AC;&#x153;faceâ&#x20AC;? while completely supporting the fascicle end at your skin. The deeper the puncture gets, the more stable, and hemorrhaging of disrupted capillaries soon forms a blood pool from which to make the withdrawal. The saw-edged maxilla have already cut the skin cleanly so that no reactive force of puncture will be felt, and the hypopharynx is feeding saliva into your blood. The saliva contains numbing agents and anticoagulants to prevent clotting and to make the blood run smoothly to her. Contained also within the saliva could be some of the worse scourges of humanity. There were an estimated 228 million cases of malaria worldwide in 2018, according the World Health Organization (WHO), causing 416,000 estimated deaths. These deaths were disproportionately distributed (85%) in 20 African countries and India. Moreover, children (67%) are the most likely to die of the disease. The greatest impact is on maternal, infant and child health, especially in vulnerable African populations. While death rates are being lowered and more countries join the malaria-free club each year, the worldwide reduction rate has leveled off, caused by a number of factors. One of those factors is the gradual evolution

of the mosquito vector and the parasite she carries. Resistance of mosquito populations to pyrethroid-based insecticides used typically to treat mosquito nets is widespread and increasing. The basic population dynamic is straightforward: the introduced toxicant or preventative effectively eliminates large segments of a population initially. Over time, however, members of the population that do survive because of some genetic advantage to resist are able to reproduce. Across