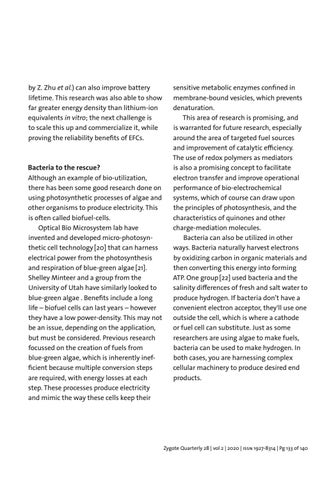 by Z. Zhu et al.) can also improve battery lifetime. This research was also able to show far greater energy density than lithium-ion equivalents in vitro; the next challenge is to scale this up and commercialize it, while proving the reliability benefits of EFCs.

Bacteria to the rescue? Although an example of bio-utilization, there has been some good research done on using photosynthetic processes of algae and other organisms to produce electricity. This is often called biofuel-cells. Optical Bio Microsystem lab have invented and developed micro-photosynthetic cell technology [20] that can harness electrical power from the photosynthesis and respiration of blue-green algae [21]. Shelley Minteer and a group from the University of Utah have similarly looked to blue-green algae . Benefits include a long life â&#x20AC;&#x201C; biofuel cells can last years â&#x20AC;&#x201C; however they have a low power-density. This may not be an issue, depending on the application, but must be considered. Previous research focussed on the creation of fuels from blue-green algae, which is inherently inefficient because multiple conversion steps are required, with energy losses at each step. These processes produce electricity and mimic the way these cells keep their

sensitive metabolic enzymes confined in membrane-bound vesicles, which prevents denaturation. This area of research is promising, and is warranted for future research, especially around the area of targeted fuel sources and improvement of catalytic efficiency. The use of redox polymers as mediators is also a promising concept to facilitate electron transfer and improve operational performance of bio-electrochemical systems, which of course can draw upon the principles of photosynthesis, and the characteristics of quinones and other charge-mediation molecules. Bacteria can also be utilized in other ways. Bacteria naturally harvest electrons by oxidizing carbon in organic materials and then converting this energy into forming ATP. One group [22] used bacteria and the salinity differences of fresh and salt water to produce hydrogen. If bacteria donâ&#x20AC;&#x2122;t have a convenient electron acceptor, they'll use one outside the cell, which is where a cathode or fuel cell can substitute. Just as some researchers are using algae to make fuels, bacteria can be used to make hydrogen. In both cases, you are harnessing complex cellular machinery to produce desired end products.