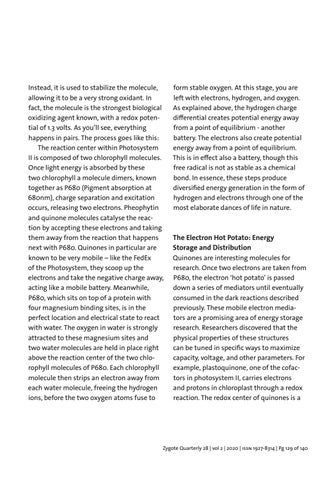 Instead, it is used to stabilize the molecule, allowing it to be a very strong oxidant. In fact, the molecule is the strongest biological oxidizing agent known, with a redox potential of 1.3 volts. As you’ll see, everything happens in pairs. The process goes like this: The reaction center within Photosystem II is composed of two chlorophyll molecules. Once light energy is absorbed by these two chlorophyll a molecule dimers, known together as P680 (Pigment absorption at 680nm), charge separation and excitation occurs, releasing two electrons. Pheophytin and quinone molecules catalyse the reaction by accepting these electrons and taking them away from the reaction that happens next with P680. Quinones in particular are known to be very mobile – like the FedEx of the Photosystem, they scoop up the electrons and take the negative charge away, acting like a mobile battery. Meanwhile, P680, which sits on top of a protein with four magnesium binding sites, is in the perfect location and electrical state to react with water. The oxygen in water is strongly attracted to these magnesium sites and two water molecules are held in place right above the reaction center of the two chlorophyll molecules of P680. Each chlorophyll molecule then strips an electron away from each water molecule, freeing the hydrogen ions, before the two oxygen atoms fuse to

form stable oxygen. At this stage, you are left with electrons, hydrogen, and oxygen. As explained above, the hydrogen charge differential creates potential energy away from a point of equilibrium - another battery. The electrons also create potential energy away from a point of equilibrium. This is in effect also a battery, though this free radical is not as stable as a chemical bond. In essence, these steps produce diversified energy generation in the form of hydrogen and electrons through one of the most elaborate dances of life in nature.

The Electron Hot Potato: Energy Storage and Distribution Quinones are interesting molecules for research. Once two electrons are taken from P680, the electron ‘hot potato’ is passed down a series of mediators until eventually consumed in the dark reactions described previously. These mobile electron mediators are a promising area of energy storage research. Researchers discovered that the physical properties of these structures can be tuned in specific ways to maximize capacity, voltage, and other parameters. For example, plastoquinone, one of the cofactors in photosystem II, carries electrons and protons in chloroplast through a redox reaction. The redox center of quinones is a