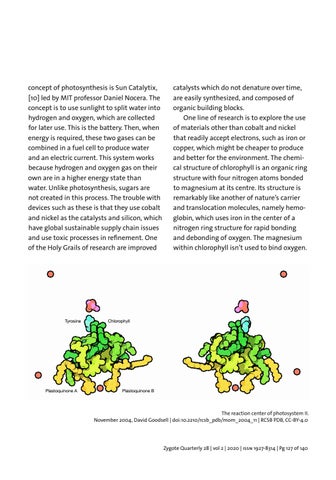 concept of photosynthesis is Sun Catalytix, [10] led by MIT professor Daniel Nocera. The concept is to use sunlight to split water into hydrogen and oxygen, which are collected for later use. This is the battery. Then, when energy is required, these two gases can be combined in a fuel cell to produce water and an electric current. This system works because hydrogen and oxygen gas on their own are in a higher energy state than water. Unlike photosynthesis, sugars are not created in this process. The trouble with devices such as these is that they use cobalt and nickel as the catalysts and silicon, which have global sustainable supply chain issues and use toxic processes in refinement. One of the Holy Grails of research are improved

catalysts which do not denature over time, are easily synthesized, and composed of organic building blocks. One line of research is to explore the use of materials other than cobalt and nickel that readily accept electrons, such as iron or copper, which might be cheaper to produce and better for the environment. The chemical structure of chlorophyll is an organic ring structure with four nitrogen atoms bonded to magnesium at its centre. Its structure is remarkably like another of natureâ&#x20AC;&#x2122;s carrier and translocation molecules, namely hemoglobin, which uses iron in the center of a nitrogen ring structure for rapid bonding and debonding of oxygen. The magnesium within chlorophyll isnâ&#x20AC;&#x2122;t used to bind oxygen.