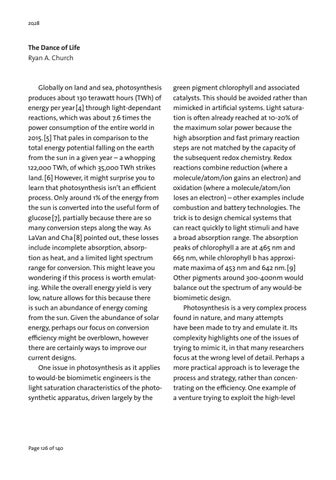 Globally on land and sea, photosynthesis produces about 130 terawatt hours (TWh) of energy per year [4] through light-dependant reactions, which was about 7.6 times the power consumption of the entire world in 2015. [5] That pales in comparison to the total energy potential falling on the earth from the sun in a given year – a whopping 122,000 TWh, of which 35,000 TWh strikes land. [6] However, it might surprise you to learn that photosynthesis isn’t an efficient process. Only around 1% of the energy from the sun is converted into the useful form of glucose [7], partially because there are so many conversion steps along the way. As LaVan and Cha [8] pointed out, these losses include incomplete absorption, absorption as heat, and a limited light spectrum range for conversion. This might leave you wondering if this process is worth emulating. While the overall energy yield is very low, nature allows for this because there is such an abundance of energy coming from the sun. Given the abundance of solar energy, perhaps our focus on conversion efficiency might be overblown, however there are certainly ways to improve our current designs. One issue in photosynthesis as it applies to would-be biomimetic engineers is the light saturation characteristics of the photosynthetic apparatus, driven largely by the

green pigment chlorophyll and associated catalysts. This should be avoided rather than mimicked in artificial systems. Light saturation is often already reached at 10-20% of the maximum solar power because the high absorption and fast primary reaction steps are not matched by the capacity of the subsequent redox chemistry. Redox reactions combine reduction (where a molecule/atom/ion gains an electron) and oxidation (where a molecule/atom/ion loses an electron) – other examples include combustion and battery technologies. The trick is to design chemical systems that can react quickly to light stimuli and have a broad absorption range. The absorption peaks of chlorophyll a are at 465 nm and 665 nm, while chlorophyll b has approximate maxima of 453 nm and 642 nm. [9] Other pigments around 300-400nm would balance out the spectrum of any would-be biomimetic design. Photosynthesis is a very complex process found in nature, and many attempts have been made to try and emulate it. Its complexity highlights one of the issues of trying to mimic it, in that many researchers focus at the wrong level of detail. Perhaps a more practical approach is to leverage the process and strategy, rather than concentrating on the efficiency. One example of a venture trying to exploit the high-level