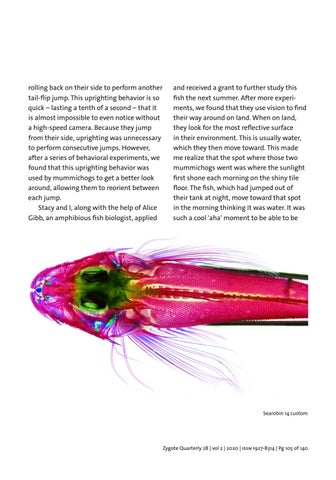 rolling back on their side to perform another tail-flip jump. This uprighting behavior is so quick â&#x20AC;&#x201C; lasting a tenth of a second â&#x20AC;&#x201C; that it is almost impossible to even notice without a high-speed camera. Because they jump from their side, uprighting was unnecessary to perform consecutive jumps. However, after a series of behavioral experiments, we found that this uprighting behavior was used by mummichogs to get a better look around, allowing them to reorient between each jump. Stacy and I, along with the help of Alice Gibb, an amphibious fish biologist, applied

and received a grant to further study this fish the next summer. After more experiments, we found that they use vision to find their way around on land. When on land, they look for the most reflective surface in their environment. This is usually water, which they then move toward. This made me realize that the spot where those two mummichogs went was where the sunlight first shone each morning on the shiny tile floor. The fish, which had jumped out of their tank at night, move toward that spot in the morning thinking it was water. It was such a cool 'aha' moment to be able to be