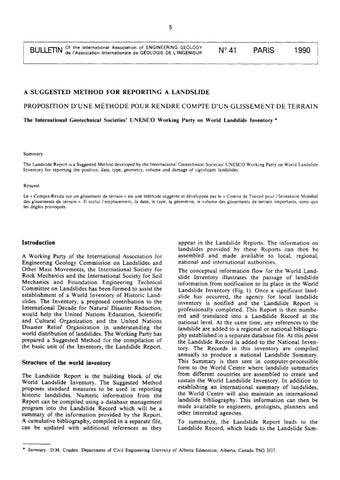 Introduction A Working Party of the International Association for Engineering Geology Commission on Landslides and Other Mass Movements, the International Society for Rock Mechanics and the International Society for Soil Mechanics and Foundation Engineering Technical Committee on Landslides has been formed to assist the establishment of a World Inventory of Historic Landslides. The Inventory, a proposed contribution to the International Decade for Natural Disaster Reduction, would help the United Nations Education, Scientific and Cultural Organization and the United Nations Disaster Relief Organization in understanding the world distribution of landslides. The Working Party has prepared a Suggested Method for the compilation of the basic unit of the Inventory, the Landslide Report.

Structure of the world inventory The Landslide Report is the building block of the World Landslide Inventory. The Suggested Method proposes standard measures to be used in reporting historic landslides. Numeric information from the Report can be compiled using a database management program into the Landslide Record which will be a summary of the information provided by the Report. A cumulative bibliography, compiled in a separate file, can be updated with additional references as they

Movements (1990). This terminology is currently used in many regional and national inventories, including those in Canada, Czechoslovakia, Italy and the U.S.A. (Carrara and Merenda, 1976; Pasek, 1975; Thomson and Morgenstern, 1977; Varnes, 1984). The Landslide Report is arranged to permit ready coding for computer processing. Consequently, observations are either numeric or, of mutually exclusive categories that can be classified numerically. Each category is represented by a number so that information is transcribable to the electronic database. References in the Report and descriptive comments will not be transferred to the Landslide Record. A separate file of references will however be created and represented by numbers in the Record. The comments need not be transferred to the Record but should remain on file with the Landslide Report. Landslide Reports should be maintained in National Centres for public reference. We now discuss specifications of the measurements of an individual landslide which can be included in the landslide Report (Fig. 4). Position

mary, transferring information from the local to regional or national centres, and thence to the World Centre. All three components provide the foundation on which the World Landslide Inventory is based.

The Landslide Report The Landslide Report, a suggested method of reporting landslides, provides a permanent record of details that cannot be coded in the database Record. Because of the need to code the data, complex, descriptive details which may face language barriers are avoided. The Report establishes minimum data requirements while permitting additional, detailed observations in the 'comments' (Fig. 2, 3). Because it is not practical to report all landslides, it is necessary to create a working definition of a significant landslide. We propose that a significant landslide is one that satisfies at least one of the following criteria : I) is over 1 million cubic metres in volume 2) causes casualties 3) causes considerable direct or indirect damage. As this Inventory is concerned with historic landslides, only those that can be dated to, at least, the nearest year should be recorded. The Report uses terminology from Varnes (1978) and the I A E G Commission on Landslides and Other Mass

The position of each landslide is to be m a p p e d by its latitude and longitude to the nearest second. This provides a reference point for subsequent mapping and research. On landslides which extend over more than one second, the crown of the landslide should be taken as the reference point. The elevation of the tip of the landslide, the toe of the surface of rupture and the highest point of the crown above mean sea level should be recorded to the nearest 10 m. Date

The date of occurrence should be recorded. Difficulties arise when the movement is not fast. When movement is progressive and takes place over an extended period of time, the 'date of occurrence" is when the most rapid displacement took place. If this is not known, the day when displacement last took place should be recorded. Type

The most widely used classification is Varnes' (1978). It was based on Sharpe (1938) and augmented from other sources (Zischinsky, 1966; Zaruba and Mencl, 1969; Skempton and Hutchinson, 1969; Nemcok, et al., 1972; and de Freitas and Watters, 1973). Varnes' classification is based on two criteria : the type of movement and the material involved. Material is classified as either bedrock or engineering soil. Soils are divided into debris or earth. The latter is fine grained material in which at least 50 percent are sand, silt, and clay-sized particles. There are five main types of movement : falls, topples, slides, spreads and flows. A sixth group includes all complex failures in which one of the five main types of movement is followed by another main type of movement. Some movements may exhibit more than two types o f movement in sequence. Most movements are complex Varnes (1978) suggested

the construction of names for the movements which reflected their complexity.

place. Material descend mostly through air by either free fall, saltation or rolling (Fig. 5a, 5b).

Consider the Elm landslide in which the displaced rock mass fell, shattered and flowed as debris (Fig. 5a). This was a rock fall-debris flow (Varnes 1978 p. 21). The complex type of movement can be accommodated in the report by describing a second type of movement which follows the first.

Topples involve the forward rotation of the displaced mass about an axis at or near its base. Topples may precede or follow falls or slides and are sometimes evident as detached blocks perched precariously on a valley wall (Fig. 5b).

To aid in the definition of movement type, a brief description is given of each, according to Vames (1978). In falls, a mass is detached from a steep slope along a surface on which little or no shear displacement takes

Slides are movements of a more or less coherent mass along one or more well-defined surfaces of rupture (Fig. 4). In spreads, the dominant mode of movement is lateral extension accommodated by either shear or tensile fractures (Fig. 5c).

Flows include a wide range of movements with significant variations in velocity and water content which exhibit spatially continuous deformations. Flows often begin as either slides, falls, or as topples on steep sloped which rapidly disintegrate with the loss of cohesion of the displaced materials (Fig. 5a).

Geometry The length, width and depth of the rupture surface can often be estimated when parts of the surface of rupture

are obscured. They are shown by a subscripted r. The length, width and thickness of the mass of displaced material are measured directly and are denoted with a subscripted d (Fig. 4). The maximum length of the rupture surface, Lr, is measured from the toe of the surface of rupture to the crown. The other length measure, Ld, is taken from the tip of the displaced material to its top. The total length, L, is measured from the tip to the crown (Varnes, 1978). The maximum widths of the surface of rupture, Wr,

Fig. 4 : Landslide features and dimensions used for the Landslide Report.

The Working Party has set up Working Groups to suggest methods of classifying the rates of movement of landslides, their causes, their geology, their activity and the distribution of movement within landslides. Another Working Group is studying the creation of Landslide Summaries. The recommendations of these Working Groups will be used to expand and modify the Suggested Method for Reporting a Landslide.

Acknowledgements The Working Party is grateful to UNESCO for funding the travel of some members to meetings to discuss the Suggested Method.

References Any reports on the landslide should be referenced in the Report. These and the reporter's name and address are made available should supplemental information be desired.

Additional comments can be added at the end of the report. This information will not be coded in the Landslide Record, but will instead be made available on the original Report.

The need to establish a World Landslide Inventory is apparent. The world distribution of landslides has not yet been mapped. Landslide studies are isolated, limiting their interpretation to local factors. Looking at the occurrence of landslides on a much larger scale may reveal broad scale or interactive processes that contribute to movements. There is an obvious analogy to be drawn with the study of earthquakes. The suggested method for reporting landslides, the Landslide Report, should simplify acquiring and accumulating information. Because the task of studying and reporting all significant landslides is immense, the Report requires a minimum of observations. These data, when transcribed to the Record and compiled at the World Centre, will provide the basis for subsequent analyses. Once the World Inventory is in place, the databank will provide information that will help to establish world patterns of landslide occurrence. This in turn will lead to a better understanding of the causes of landslides and to more accurate hazard assessments. Thus, the World Landslide Inventory will eventually lead to better predictive models, which can then be used to alleviate landslide risk. The structure of the Inventory and the format of the Report are suggestions which can be modified by discussions from within and without the Joint Working Party. The Working Party (listed in Appendix A) welcomes carefully documented proposals for additions or amendments to the Suggested Method. A SUGGESTED METHOD FOR REPORTING A LANDSLIDE

A SUGGESTED METHOD FOR REPORTING A LANDSLIDE