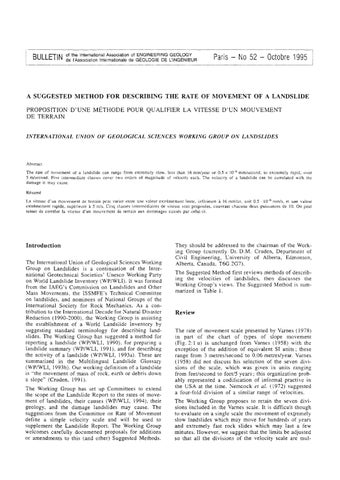 ! BULLETIN of the InternationalAssociationof ENGINEERING GEOLOGY

Introduction The International Union of Geological Sciences Working Group on Landslides is a continuation of the International Geotechnical Societies' Unesco Working Party on World Landslide Inventory (WP/WL[). It was formed from the IAEG's Commission on Landslides and Other Mass Movements, the I S S M F E ' s Technical Committee on landslides, and nominees of National Groups of the International Society for Rock Mechanics. As a contribution to the International Decade for Natural Disaster Reduction (1990-2000), the Working Group is assisting the establishment of a World Landslide Inventory by suggesting standard terminology for describing landslides. The Working Group has suggested a method for reporting a landslide (WP/WLI, 1990), for preparing a landslide summary (WP/WLI, 1991), and for describing the activity of a landslide (WP/WLI, 1993a). These are summarized in the Multilingual Landslide Glossary (WP/WLI, 1993b). Our working definition of a landslide is "'the movement of mass of rock, earth or debris down a slope" (Cruden, 1991). The Working Group has set up Committees to extend the scope of the Landslide Report to the rates of movement of landslides, their causes (WP/WL[, 1994), their geology, and the damage landslides may cause. The suggestions from the Committee on Rate of Movement define a simple velocity scale and will be used to supplement the Landslide Report. The Working Group welcomes carefully documened proposals for additions or amendments to this (and other) Suggested Methods.

Review The rate of movement scale presented by Varnes (1978) in part of the chart of types of slope movement (Fig. 2:1 u) is unchanged from Varnes (1958) with the exception of the addition of equivalent SI units; these range from 3 metres/second to 0.06 metres/year. Varnes (1958) did not discuss his selection of the seven divisions of the scale, which was given in units ranging from feet/second to feet/5 years; this organization probably represented a codification of informal practive in the USA at the time. N em co ck et al. (1972) suggested a four-fold division of a similar range of velocities. The Working Group proposes to retain the seven divisions included in the Varnes scale. It is difficult though to evaluate on a single scale the movement of ext.remely slow landslides which may move for hundreds of years and extremely fast rock slides which may last a few minutes. However, we suggest that the limits be adjusted so that all the divisions of the velocity scale are mul-

76 tiples of 100 (0.5 and 50 mm/s, for instance - see Table I). This can be achieved by slightly increasing the lower limit of upper class of Varnes scale from 60 to 16 mm/year. These two limits, including the five intermediate divisions, span ten orders of magnitude in the velocity scale. Morgenstern (1985) drew an analogy between the divisions of the Varnes scale and the modified Mercalli scale of earthquake intensity. He pointed out that the effects of a landslide can be sorted into six categories corresponding approximately to the six fastest movement ranges of the Varnes scale. The Working Group has added a seventh category frequently met in built-up areas affected by extremely slow movements to correspond with the divisions of the velocity scale (see Table 1). Discussion

The slope-movement literature lacks a unified scale of degree of destruction, comparable to the Mercalli scale of earthquake intensity. The Mercalli scale is based on descriptions of local effects of an earthquake; degrees of damage can be evaluated by investigating a house or a section of a street. On the other hand, the earthquake magnitude can be correlated with the total energy release of the event. Both local damage and the area affected are related to the magnitude of the earthquake, although the foundation and structural systems of the buildings and the response of the ground also play an important part in the magnitude of the damage. The situation is different for landslides. Very small, rapid, debris avalanches are known to have caused total destruction and loss of lives locally. On the other hand, a large slope movement of moderate velocity may have much less serious effects because it can be avoided if it has been detected previosuly, or the structures affected can be evacuated and rebuilt or protected by physical

control works. This suggests that a measure of landslide risk requires an understanding of both the volume affected and the probable m a x i m u m velocity: the product of these two parameters is approximately proportional to the gross power release of the landslide. Varnes et al. (1984) drew attention to the UNDRO (now the United Nations Department of Humanitarian Affairs - UNDHA) terminology in which the specific risk, Rs, the expected degree of loss due to landsliding or other natural phenomena, can be estimated as the product H x V. The hazard, H, is the probability of occurrence of the phenomena within a given area ; the vulnerability, V, is the expected degree of loss of elements at risk, namely population, properties and economic activities in the given area. The vulnerability ranges from 0 to 1. The landslide risk, is then obtained by multiplying R~ by the value of exposed objects. In this terminology, the velocity of the landslide might be correlated with vulnerability and the hazard with landslide volume. A third fundamental parameter, which is difficult to quantify, is the internal distortion of the displaced mass. Structures and buildings on the mass would be damaged in proportion to the internal distortion or differential velocity affecting their foundations (Gabus et al., 1988. Noverraz and Bonnard, 1990). For example, the Lugnez landslide in Switzerland (Huder, 1976) has an area of 25kin'- (total v o l u m e : 4 x 109m3), moving steadily down a 15~ slope at velocities of up to 0.37 m/year. The movements have been observed by surveying since 1887. Yet, there are six large villages on the slope, with 300-year-old stone houses and 15th century churches with bell towers. None of these structures have suffered significant damage when displaced over centuries because the sliding ground on which they are founded is locally moving without distortion. Thus, damage will also depend on the type of landslide, and each type may require separate consideration: a numerical parameter similar to vulnerability could take this distortion phenomenon into account.

1. No damage to structures built with precautions.

Proposal Velocity alone is a parameter whose destructive significance requires definition. Some typical case histories in which the effects of a landslide on humans and their activities have been well described and for which maximum velocities are also known are listed in Table 2. These cases have been sorted into seven categories, according to the m a x i m u m r e c o r d e d velocity d u r i n g an exceptional h e h a v i o u r phase. The seven classes of velocity given in Table 1 thus correspond to the following situations and damage, provided that exposed structures do e x i s t : 7. Catastrophe of major violence. Exposed buildings totally destroyed and population killed by impact of displaced material, or by disaggregation of the displaced mass. 6. Some lives lost, because the landslide velocity is too great to permit all persons to escape. Major destruction. 5. Escape evacuation possible. Structures, possessions and equipment destroyed by the displaced mass. 4. Insensitive structures can be maintained if they are located a short distance in front of the toe of the displaced mass ; structures located on the displaced mass are extensively damaged. 3. Roads and insensitive structures can be maintained with frequent and heavy maintenance work, if the movement does not last too long and if differential movements at the margins of the landslide are distributed across a wide zone. 2. Some permanent structures undamaged or, if they are cracked by the movement, they can be repaired.

Table 1 shows a correspondence between the vulnerability classes as defined above and the selected landslide velocity scale. A major limit appears to lie between very rapid and extremely rapid movement, which approximates the speed of a person running (5 rrdsec) and clearly separates rock fall from most of the flow phenomena. Another important boundary is between the slow and very slow classes (1.6 m/year), below which some structures on the landslide are undamaged. Finally, the upper limit of class 1 (extremely slow movement) is the velocity (16 mm/year) below which most types of buildings will not be damaged if their foundations are adapted to movements, to avoid some cracking of walls.

Final c o m m e n t s We note that the proper determination of the peak velocity of any given landslide, considering the spatial and temporal variation of movements, is a very difficult task if the right monitoring equipment is not available on the site at the right moment, or if its operation is affected by the conditions in which the catastrophic phase of the movement occurs, by night, by dust, by fear, and so forth. Therefore, it is not necessary, considering the qualitative aim of this velocity scale, to focus on the proposed limits of the scale as if they were rigid values. This classification of rates of movement is obviously schematic, as peak velocity alone may not give a sufficient description of the related event (eg. at the margin of a slide). It does not include a parameter to express the ratio between the peak velocity used in the vulnerability scale and the long-term average velocity that is

78 easier t o determine for very slow landslides, on the basis of their morphological features. This ratio is important because high values express an element of surprise for the population involved. Furthermore, the determination of the peak velocity in classes 5 and lower greatly depends on the time during which the movements were observed and on the eventuality of recording an exceptional acceleration. Further discussion will improve this first proposal. Meanwhile, to promote simple and meaningful information on landslide velocity in the World Landslide Inventory, the proposed scale is considered a practical method of including velocity data in a Landslide Report. A SUGGESTED METHOD FOR DESCRIBING THE RATE OF MOVEMENT OF A LANDSLIDE Paris - No 52 - 0ctobre 1995 i R~sum6 La vitesse d'un mouvernent de te...

A SUGGESTED METHOD FOR DESCRIBING THE RATE OF MOVEMENT OF A LANDSLIDE Paris - No 52 - 0ctobre 1995 i R~sum6 La vitesse d'un mouvernent de te...