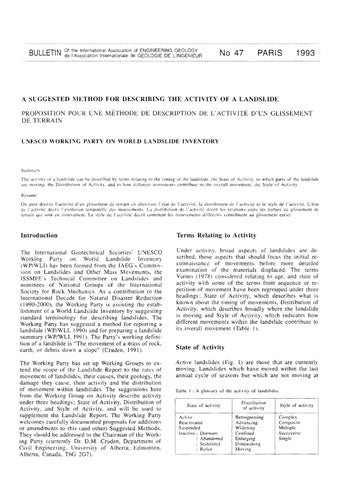 The International Geotechnical Societies" UNESCO Working Party on World Landslide Inventory (WP/WLI) has been formed from the IAEG's Commission on Landslides and Other Mass Movements, the ISSMFE's Technical Committee on Landslides and nominees of National Groups of the International Society for Rock Mechanics. As a contribution to the International Decade for Natural Disaster Reduction (1990-200(}). the Working Party is assisting the establishment of a World Landslide Inventory by suggesting standard terminology for describing landslides. The Working Party has suggested a method for reporting a landslide (WP/WLI, 1990) and for preparing a landslide summary (WP/WLI, I991). The Party's working definition of a landslide is "The movement of a mass of rock, earth, or debris down a slope" (Cruden, 1991).

Under activity, broad aspects of landslides are described, those aspects that should foctts the initial reconnaissance of movements before more detailed examination of the materials displaced. The terms Varnes (1978) considered relating to age, and state of activity with some of the terms from sequence or repetition of movement have been regrouped under three headings; State of Activity, which describes what is known about the timing of movements, Distribution of Activity, which describes broadly where the landslide is moving and Style of Activity, which indicates how different movements within the landslide contribute to its overall movement (Table 1).

The Working Party has set up Working Groups to extend the scope of the Landslide Report to the rates of movement of landslides, their causes, their geology, the damage they cause, their activity and the distribution of movement within landslides. The suggestions here from the Working Group on Activity describe activity under three headings; State of Activity, Distribution of Activity, and Style of Activity, and will be used to supplement the Landslide Report. The Working Party welcomes carefully documented proposals for additions or amendments to this (and other) Suggested Methods. They should be addressed to the Chairman of the Working Party (currently Dr. D.M. Cruden, Department of Civil Engineering, University of Alberta, Edmonton, Alberta, Canada, T6G 2G7).

Active landslides (Fig. 1) are those that are currently

moving. Landslides which have moved within the last annual cycle of seasons but which are not moving at "Fable I : A glossary of the a c t i v i t y of landslides.

Fig. 2 : Displacement of a landslide in different states of activity.

which occurred over ten thousand years earlier under periglacial conditions (Skempton and Weeks, 1976). A landslide which is again active after being inactive may be called reactivated. Slides that are reactivated generally move on pre-existing shears whose strength parameters approach residual (Skempton, 1970) or ultimate (Krahn. Morgenstern, 1979) values. They can be distinguished from first-time slides on whose rupture surfaces resistance to shear may initially approach peak values.

The definitions of the various states of activity can also be shown on a graph of the displacement of the displacing material against time (Fig. 2). This graph might be created by plotting differences in the position of a target on the displacing material against time. Such graphs are particularly suited to portraying the behaviour of slow-moving landslides, as they pre-suppose the target does not displace significantly over the time period during measurement. The velocity of the target can be estimated by the average rate of displacement of the target over the time period between measurements.

Distribution of Activity (Fig. 3) present were described by Varnes (1978) as suspended (Fig. 1.2). Inactive landslides are those which last moved more than one annual cycle of seasons ago. This state may be subdivided. If the causes of movement apparently remain, then the landslides are dormant (Fig. 1.4). Perhaps, however, the river which had been eroding the toe of the moving slope has itself changed course and the landslide is ABANDONED as in Fig. 1.5 (Hutchinson, Gostelow, 1976). If the toe of the slope has been protected against erosion by bank armoring or other artificial remedial measures have stopped the movement the landslide can be described as stabilized. Landslides often remain visible in the landscape for thousands of years after they have initially moved. Landslides which have clearly developed under different geomorphological or climatic conditions have been called relict (Fig. 1.6). Road construction in Southern England for instance reactivated relict debris flows

Fig. 3 : Sections through slides showing different distributions of activity: I) Advancing: 2) Retrogressing; 31 Enlarging: 41 Diminishing: 5) Confined. In diagrams 1-4, Section 2 shows the slope after mo,,ement on the rupture surface indicated by the shear arrow in the section. Displaced material is dotted. Diagrams 1-3 show muhiple slides.

directions, Varnes (1978, p. 23) suggested the term progressive for the landslide while noting this term had also been used for both a d v a n c i n g and retrogressing landslides. This term is also current for describing the process, progressive failure, by which the rupture surface in some slides extends. The possibility of confusion seems sufficient now to a b a n d o n "progressive" in favour of describing the landslide as enlarging (Fig. 3.3). To complete the possibilities, terms are needed for landslides in which the volume of displacing material can be seen to be reducing with time and for those landslides where no trend is obvious. Movements such as rotational slides and topples may stop naturally after substantial displacements because the movements themselves reduce the gravitational forces on the displaced masses. Alternatively, rock masses may he dilated by m o v e m e n t s that rapidly increase the volumes of cracks in the masses and cause decreases in fluid pore pressures within these cracks. However to conclude that the displacing mass in stabilizing because its volume is decreasing may be premature. Hutchinson (1973) has pointed out that the activity of rotational slides caused by erosion at the toe of slopes in cohesive soils is often cyclic. The term,

Fig. 4 : Sections through landslides showing different styles of activity: I) Complex, gneiss (AI and migmatites (I) toppled with valley incision, alluvial deposits filled in the valley bottom. After weathering weakened the toppled material, some of the displaced mass slid (Giraud et al., 1990); 2) Composite, limestones have slid on the underlying shales causing toppling below the toe of the slide rupture surface (Harrison and Falcon. 1934): 3) Successive. the later slide, AB. is of the same type as slide, DC, but does not share displaced material or a rupture surface with it: 4) Single.

diminishing (Fig. 3.4), for a landslide whose displacing material is decreasing in volume seems free of undesired implications. Landslides whose displaced materials continue to move but whose rupture surfaces show no visible changes can be simply described as moving.

topples in which some of the displaced mas~ subsequently slid. a complex rock-topple rock-slide. Not all the toppled mass slid but no signiHcant part of thc displaced mass slid without first toppling. Notice that some of the displaced mass may be still toppling while other parts are sliding. The term compos#e, can be used to distinguish landslides, previously described as complex, in which two different types of movements occur in difl'erent areas of the displaced mass. The roof and wall collapse structures described by Harrison and Falcon (1934, 1936), called slide-toe topples by G o o d m a n and Bray, (1976,~ are composite rock-slide rock-topples (Fig. 4.2). Composite was introduced by Prior, Stephens and Archer (1968) to describe mudflows in which "'slipping and sliding ... occur in intimate association with flowing" (p. 65) "the material .... behaves as a liquid and flows rapidly between confining marginal shears" (p. 76). These movements were composite earth-slides earthflows.

A svccessive movement is identical in type to an earlier movement but in contrast to a multiple movement does not share displaced material or a rupture surface with it (Fig. 4.3). According to Skempton and Hutchinson (1969) "'Successive rotational slips consist of an assembly of individual shallow rotational slips". Hutchinson (1967) commented that "Irregular successive slips which form a mosaic rather than a stepped pattern in plan are also lbund."

Single landslides consist of a single movement of dis-

lict landslides. These would describe how vegetation recolonizes the surfaces exposed by sh}pc movements and also the dissection of the new topography bv drainage. The rate of these changes depends both on the local climate and the local vegetation. When the main scarp of a landslide has new vegetation rooting in it, the landslide is usually dormant: when drainage extends across a landslide without obvious discontinuities the landslide is often relict. However, these generalizations should be confirmed by detailed study of sample slope movements under local conditions..

Acknowledgements The members of the Working Group on Activity are D.M. Cruden, J. Farkas, J.N. Hutchinson, S. Novosad, W.H. Ting, D.J. Varnes and G.X. Wang. We are grateful to U N E S C O Earth Sciences Division for funding the travel of some Working Party members to meetings to discuss the Suggested Method.

placed material often as an unbroken block (Fig. 4.4). They are in contrast to the previous styles of movement which require disruption of the displaced mass or independent movements of portions of the mass.

There is some redundancy in using the descriptions of activity with the Working Party's Suggested Method for Describing the Rate of M o v e m e n t o f Landslides (WPIWLI, 1993). Clearly, if the landslide has a measurable rate of movement, it is either active or reactivated. The State of Activity might then be used to refer to conditions before the current m o v e m e n t s of the landslide. If, for instance, remedial measures had been undertaken on a landslide which is now moving with a moderate velocity the landslide might be described as a previously stabilized, moving, moderate velocity landslide. Landslides with no discernible history of previous movements would be described by the term active. A SUGGESTED METHOD FOR DESCRIBING THE ACTIVITY OF A LANDSLIDE

Terms Relating to Activity Active landslides (Fig. 1) are those that are currently moving. Landslides which have moved within the last annua...

A SUGGESTED METHOD FOR DESCRIBING THE ACTIVITY OF A LANDSLIDE

Terms Relating to Activity Active landslides (Fig. 1) are those that are currently moving. Landslides which have moved within the last annua...