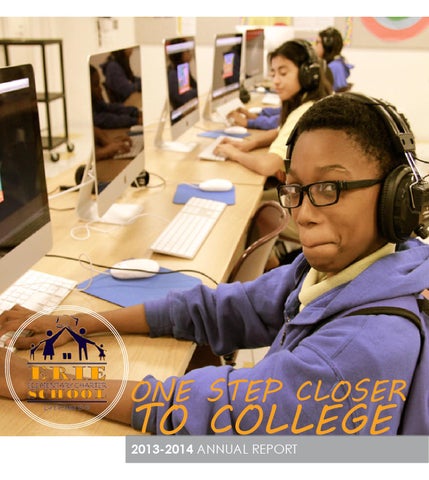 For the second year, all of our 8th grade graduates moved on to college prep high schools, including two in International Baccalaureate programs.

The 2013-2014 school year was the very first year….. that we didn’t have any “firsts”! We started our second year in our fully complete campus and a second group of 8th graders graduated from Erie and moved on to college prep high schools. To further support both our 8th graders, and also our growing group of alumni, we added a High School Coordinator who educates parents and students on the process of applying to high schools, supports students and families during the application process and tracks and supports alumni. For the second year, all of our 8th grade graduates moved on to college prep high schools, including two in International Baccalaureate programs. In addition to expanding our support of 8th graders and alumni, Erie’s dual language program grew up to 4th grade. Erie continues to be one of the very few true dual language immersion programs in Chicago’s public school system. In fact, Erie’s own dual language kindergarten teacher, Susan Pryor, now tours the country presenting on the topic of teaching for biliteracy.

We also spent the last year enjoying Erie’s newly completed space. Erie has become the host gym for the middle school basketball league, and we now have plenty of room to provide additional academic supports for struggling students. We’re so thrilled to fully use our space and to give our students the school facility they truly deserve. As we do every year, we thank you so very much for your support. With public funding so unsteady, your support makes an enormous difference to Erie. We would love to thank you in person, so please come visit us soon! Warmly,

With all the focus around standardized assessments, we thought it was a good time to get back to basics.

48% live in the surrounding neighborhood

17 families live in situations so unstable they are considered homeless

goal is for every

graduate to succeed in high

How do we know if what we are doing at EECS is working? Assessments certainly tell one part of that story, but perhaps a more important metric is the ‘on track’ rate of our graduates, as measured by the CCSR’s indicator. To keep students, ‘on track’ the CCSR suggests improved communication between schools, parents and students, and closer monitoring of student attendance and progress in class work by parents, teachers and counselors. Erie’s High School Coordinator regularly visits EECS alumni, checks in with alumni’s high school teachers and even tracks alumni’s grades. When an alumn struggles, someone at Erie is one of the first to know and can provide support to get that student back on track.

A student is considered “on track” to graduate (according to the CCSR indicator) if he or she earns at least five full-year course credits (10 semester credits) and no more than one semester F in a core course (English, math, science or social science) in their first year of high school.

of Erie’s alumni are considered ‘on track’.

Erie has prepared me

for the rigor of a college prep high school classroom. We have been very happy with the work Erie has done preparing 8th graders in Chicago for success in high school, college, and beyond. Brendan Bedell, Assistant Principal Rauner College Prep High School

for high school and college because theyâ&#x20AC;&#x2122;ve helped me develop qualities to be responsible for all of my actions. They taught me not only to use my mind, but to use my heart and to show integrity and speak for what we feel and for whatâ&#x20AC;&#x2122;s right.

Dual Language at Erie: What the classroom pros have to say As a charter school and with an administration steadily focused on improving instruction, Erie has the ability and the will to continually adapt the classroom to improve outcomes. This flexibility means that teachers can dig into the emerging best practice movement of teaching for biliteracy. So Erie evolves as best practices evolve and as teachers we also evolve by integrating this new knowledge into our daily practice. In many schools, the dual language program is a “track” or part of the larger school and I’ve met teachers who feel very separate from the rest of the school. Not only has Erie resisted the isolationist tendencies that arise when a special program exists, rather we are actively trying to find connections between the dual language and Spanish as a Second Language programs. Susan Pryor, Dual Language Kindergarten Teacher Erie Elementary Charter School Susan is also a team member of the Center for Teaching for Biliteracy, an Erikson Institute Continuing Education Instructor, and a consultant to schools developing dual language programs.

Perhaps most importantly, Erie believes in the research: kids are capable of being bilingual, and teaching for biliteracy gives Erie kids the advantage they’ll need to succeed.

WHERE IT COMES FROM

$100,000 and above Perkins Malo Hunter Foundation

TOTAL $4,845,128 Figures taken from the Statement of Functional Expenses for the period of July 1, 2013 to June 30, 2014 and exclude revenue and expenses related to New Market Tax Credit financing as well as depreciation. For complete audited financial statements, visit www.eriecharterschool.org or call us at 773.486.7161.

Also, a big THANK YOU to all the EECS parents who fundraised for Erie in the 2013-2014 school year.